You saw the Whole of the Moon

Most of us remember Irate Rover who left some time ago and moved back to Northern Ireland. He once used to live alongside the Nußdorfer Lände, close to where the Nordbrücke crosses the River Danube.

The October Full Moon had just passed, we have seen Moon topic Movies, we know that the Moon ain't made of green cheese and, being a non-regular to our Full Moon runs, I was surprised to see more than 20 Full Moon runners.

Kuty Pi, being a Hare of the sportive sort used quite a bit of the 19th district area and god knows how many quiet streets with just posh houses we did run through until the pre-announced drink stop, the Buschenschank Wanderer am Nussberg was reached. Weisswein gespritzt and Beers made everyone happy and then it was on back downhill, sometimes through the pitchdark until the Donaukanal and the car park came along again. A fine run altogether. Moron pics will be added when they are available.

Posted by Marie Tamponette at 13:28 No comments:

No run report this time. Just a few pics I find worth posting for everyones entertainment. And some good music of course. On to to-nites Full Moon Run a little later on. 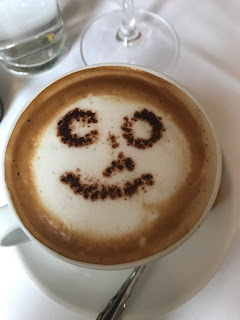 Posted by Marie Tamponette at 16:35 No comments:

On Wednesday last week, the receding Hareline showed a void for to-days run. Then Lopsided Backside volunteered and Se. Energy jumped on the Bandwagon. The endless summer, elongated into autumn provided another marvellous and sunny day so the run could start off from the carpark of Gumpoldskirchen Trainstation more or less on time.

Bummer McAgram, dear Friend of the World's Worst and longtime and original religious advisor of our sister Hash in Zagreb passed away a few days ago, therefore Rowed Runner, The Blessed Saint Norman, OVH and Free Willie decided to spend 7 hours driving back and forth to Strmec, Croatia and staying there for 6 hours to attend the ZH3 commemoration run for Bummer aka Zorki.

The local afternoon run was elegantly set and in contrast to last weeks traffic extravaganza there were no long car cues and there was more enough space to park everyone's car. The trail was leading up  and into the vineyards, winding up and down the Wasserleitungsweg and eventually to a song stop where the runners and walkers trail split. Beautiful panorama was on offer and after a not too long while it was on back to Gumpoldskirchen where the Hares excelled themselves by calling for a dwink stop at a local Heurigen (Wine and Beer in plenty for everyone). The circle was opened and St.Norman, Lord Glo-Balls, Morehair, all OVH and others (Ice Queen, Free Wilie) shared amusing stories about Bummer McAgram and the influence he had on initiating our friendly ties with the Zagreb Hash. A worthy run for a fitting commemoration of a late friend.
Moron pics to be added when they are online.

Posted by Marie Tamponette at 22:06 No comments:

Oh my GOSH oh my Golly!

After two weeks of non Hashing I steered my car up towards the Cobenzl, location of a run Hared by Grand Mattress, 2Bob and The Blessed St. Norman, OVH. As the summer does not seem to end this year (or at least the fair temperatures) it was a long and disastrous drive up the hills, only to find a plethora of Sunday drivers and packed carparks on all the numerous Gasthäuser along the Wiener Höhenstrasse.

When I arrived 40 minutes late (my own fault I know), the Cobenzl carpark was unaccessible (completely full) and cars were parked all along the Höhenstrasse (which of course is forbidden) but what the heck and OH MY GOSH our visitors were all female from the Girls Only Hash in Surrey, 19 Harriettes came to visit the more visual sites of the World's Worst. Naturally I only saw them all at the circe. When I tried to do at least the walkers trail, marks disappeared behind parked cars (only to reappear on packed pavements) later on and all I could find was the In trail which shortened my efforts to some 40 minutes (and another drive home that lasted well over an hour). Beanman was another very late latecummer and No Mercy Mistress returned home as she couldn't find any plac to park her car.
One of those GOSH ladies had done 1700 runs in her Hashing life. Well, the Surrey Hash was founded in 1975, well before our own one. 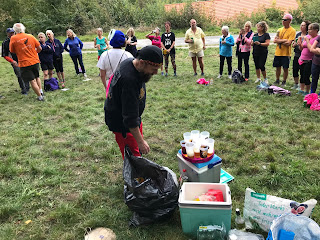 via GIPHY
Posted by Marie Tamponette at 13:39 No comments:

The last Monday run in 2018 brought forth a new member for the elitist Order of the Vindobona Hash (OVH), namely Ice Queen who reached the mark of 1000 runs on that day. Assisted by CoHare and Husband Slush Puppie the run covered some back parts of the 3rd district (yet another HUGE building area with uncountable BIG building blocks) near the Rennweg in Viennas 3rd district. Ice Queen, whose official inclusion ceremony into the ranks of the OVH is still pending, distributed beermug-shaped decorated wood plates that one can easily to cut bacon and cheese upon, for instance (see photos below).

The run was a short and easy affair and a possiblilty for me to catch a few moments in time (take photos) as both Moron Brothers are still slacking in that respect (with making their pics public). After just 40 minutes it was back to the carpark already. The celebratory Down Down for Ice Queen was handed out by Lopsided Backside in noble fashion (jubilee spanking for IQ with the wooden beer mug included) . Sincere congratulations to the first Harriette for reaching the 1000 run mark and setting a target for the next potential OVHers. 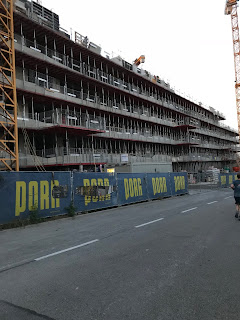 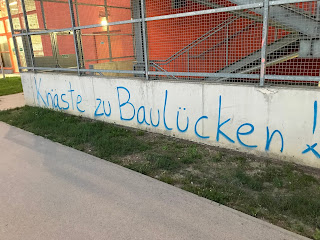 Posted by Marie Tamponette at 13:18 No comments:

Occasionally there are stories being told around the Elders of the World's Worst about runs in former years that were followed by clay-pigeon shooting contests and suckling pig menus as designates On Afters. King Ralph advertised for one such occasion (the second mentioned) to be held at a very special Gasthaus (The Gasthaus zur Alm) that borders on the area of the former Vienna Nordwestbahnhof (read about the history of this place here). The former terminal station for freight trains has been moved to Viennas 23rd district a few years ago and slowly but true building blocks are mushrooming all around, leaving just a bit of the old panorama to admire (and to set parts of a Hashrun through).

Many years ago Needleman set a remarkable run around this area which has changed profoundly, compared to what it once looked like. The first and short part of the run covered the rest of the old and now shabby train station area, then further on across the newly built area and eventually onto the Donauinsel. A special contest of throwing and catching raw eggs was announced and carried out, can't remember the winner.


The way back to the carpark was an overlong one further along the Donauinsel. Victoria's Secret, Cardinal Munk, OVH and myself decided to cut it short and arrived way earlier than all the other runners. The upside to this was earlier access to beer in the Gasthaus. The obvious downside was a circle in darkness as well having had to wait a while. Well done nonetheless.

All pics from this run can be seen here.


via GIPHY
Posted by Marie Tamponette at 12:46 No comments:

After the rain has gone

Rowed Runner, Sleeping Partner and the Blessed Saint Norman, OVH were responsible for the first September run of this year, starting from Bernreiterplatz in the 21st district. On my way over the venue there thick black clouds hanging in the air and some of them resulted in an enormous downpour which washed away most of the track, so at least it seemed to me.

Also late were King Ralph and Lucky Me and together we tried our best to find some markings, the pack seemed to be long gone. The first part to the Marchfeldkanal (yet again) seemed relatively easy, but from then on it became increasingly difficult to read the Hares' minds and intentions. After a while I found myself running on my own and at some point there were no more markings. That doesn't mean much to the proud owner a just half a mind, and after several hundred metres a flower blob was visible again (I confess by then I had turned on a Maps App on my phone) and in the beginning darkness and with tired legs I reached the Gerasdorfer Straße. Being from the other side of town, this is mostly Terra Incognita for me (and the flower marks were gone again) hence I decided to play it easy and ran back all straight over the Brünner Straße to the carpark again.

The sad thing was that several walkers/latecummers missed a Beerstop. Enough cold beer at the circle made up for that. The OnIn at the nearby Jedlersdorfer Alm was a full reconciliation for the tired runner.

No pics this time but a theme song :-


Posted by Marie Tamponette at 22:14 No comments:

Continuing with the cycle of trad-runs this next one is the annual birthday run of My Pint of View, who was supported by Kuty PI (Birthyear run) to set a run of medium length which started from his hut, up there near the Exelberg somewhere. We were late as we picked up Cardinal Munk, OVH which resulted a) in bad traffic and b) chaotic search and find action that made us arrive 10 minutes late at the carpark (together with Deodorant I hasten to add).

Catching up with the pack was a matter of 15 minutes (we found the walking group) and I was surprised when that run was leading back on the other side of the hill to the carpark after 45 minutes already. Birthday down downs, circle and BBQing and My Pints extensive porch in the Darkness followed.

Pics of this run to be viewed here.
Posted by Marie Tamponette at 21:55 No comments:

Twisting by the pool

Having all those traditional runs laid out by Hash Lash at the beginning of the Vindobona Hash year is not such a bad thing. One of these evergreens is the Entenhausen (Duckville) run somewhere in the 21st district, hared by DDr. Felch, OVH and hosted by In-cock-nee-toe. These runs usually cover one part of the other of an area located not far from the A22, which is the Donauufer Autobahn, and of course the Donauinsel which is close nearby.

Yet another hot summer evening allowed for swimming and grilling afterwards, but before that the trail led on out alongside the Marchfeldkanal and - who would have thought? - after half an hour of creepy crawling through the road maze in that part of town on over to the Donauinsel. A mean checkpoint with a steep climb to follow enabled the walking pack to easily overtake the few remaining runners on our way back and nearer my swimming pool to thee, so to speak. A cruel hoax (where is Slush Puppie when one needs him?) was the promise of a beer stop which of course was not kept. thereby increasing the Hares inpopularity. But those thoughts were washed away in the pool after the run.


All pics from this run can be viewed here.
Posted by Marie Tamponette at 21:37 No comments:

Chief Ironhat from our sister Hash in Zagreb spread the word that Zorki aka Bummer McAgram, Religious Advisor á la bonheur and a great friend of the Vindobona Hash, has passed away. He was a very funny guy and caught my attention for always wearing pink track suits when he visited one of the World's Worst Hash events, alongside with many another Hero from the ZH3. Rest in peace Bummer and thanks for the great memories. Pass on our regards to King Gook, Air Franci, The Wolf and all other Hashers up there on the other side.


Posted by Marie Tamponette at 20:51 No comments: