March 15. What can be said about Schweizerhaus opening day that hasn't been mentioned before? The same old crowd of the same old boozers - dare I say drunks - assembled at the usual time at the usual table. Usual business included a TV Camera filming our table and yes, we did make the local evening news, a few pics will be added shortly. Marathon Man came by from Cairo just for the occasion, Sex-O-Phone arrived at lunchtime and before long Alice, Lady Go Diver and (a little later) the Moron Brothers joined in. Yes we uphold our traditions and no we're not cheap.And yes we do still raise a glass or two to Minuteman, a true Schweizerhaus goer.

To follow up on the movie trailer from the last entry, here is the FZ sequence that refers to that film.

Posted by Marie Tamponette at 23:17 No comments:

Ah, the opening of the Schweizerhaus was immiment on Sunday, March 14. What lay nearer than to set a quick trail starting off from a very well known plcae which is the Wüstelstand Knusperhäuschen at the corner of Wittelsnachstraße and Rustenschacherallee not far from the Schweizerhaus. CoHare Munk and I took the trail down around the Dounakanal to same sort of the back end of the Jesuitenwiese and back more or less directly towards the main entrance of the where preparations for the opening on March 15 were busily underway. The beer stop in front of the main entrance of course featured Budweiser beer and after a short while and walk (or alternatively a free ride on the U2) it was on back to the car park and a rather windy circle.

On a completely different subject, Frank Zappa mentions the movie below on his album Roxy & Elsewhere from 1973. Give the trailer a look and give that album a listen.

Posted by Marie Tamponette at 22:30 No comments:

The ghosts from our past came back on March the 7th, impersonated by Multiple Entry and Flounder and their companion Dick Dastardly did set a course starting off from Augarten, near Donnie's old appartment in the Untere (or was it the Obere?) Augartenstraße.
Some remaining guests from the Ski Wee joined in on their last day in Ostricha and I have to admit that I was positively surprised that the Hares did NOT choose to let us run through the Augarten but rather decided to send the pack all the way back to the Donaukanal and on over into the first district. I can't really say that I am keen to run in the centre of the city on a Winter Sunday but nonetheless the Hares deserve some credit for trying to come up with a different route.
After running by the usual sights which is the Stephansplatz, Am Hof and past the Schottenkapelle (leavong Molly Darcys to our left), it was on back down the Ringstraße and over the Donaukanal back along the Augartenstraße to the cars.
My main feature of the circle at least was that Needleman bought a case of Budweiser Beer Bottles which made him immediately my current best friend during the circle :-)
A few friendly police officers (female and male) were curious about our noisemaking and singing, alas Slush Puppie failed to bribe them with at least two softies.


Are we undecided or what?

Le Hot Club de France, the best of the best!

Posted by Marie Tamponette at 21:19 No comments:

Back to the Beginning

Way back in 2001, when we all was younger, a bit more enthusiastic and a bit less disillusioned (just kidding), word had it that not only the Ski Weekers should have their run (plus a precious Stat) during their absence from Vindobona, nay, those we were left at home (i.e.US) also had a right for a run plus a precious stat.
All said and done, the string of now 10 Ski Week Solidarity runs began, preferably on the day of the Ski Week and my personal favourite having been that run when my then CoHare Munk led us all through the Allgemeine Krankenhaus (AKH) during the course of a Hash run. Can you imagine that?
On that event we had two handfuls of Tee Shirts made and a shortish little run that led mostly through Subway underpaths, a bit through the Museumsquartier (not really one of my favourite places, a bit too sterile for my taste) and via a small park back on over the Naschmarkt to the start at Karlsplatz.
A nice little circle and a slightly insulting phonecall to the Grandmeister himself (or his voicemailbox rather) later saw most of us (including two visitors) and not-so-regular returnee Death to Flying Things head off to Arthur + Arthur right around the corner in Gußhausstraße.  Not the worst of places to go to, IMO.

The following song by Tho Who' s Quadrophenia has of course absolutely nothing to do with the Ski Week Solidarity run. But I happen to like it, for a very long time already. 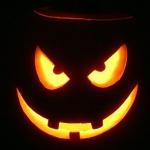 One would expect that on the first Sunday of the famous Vindobona Skiweek there would be a slightly smaller crowd than usual and once could indulge in their very own personal misery and grumpyness (like I used to a great lot over the past months).
Trés surprenant, there will still 20+ up at behind the end of Johann Staud Gasse ready to rumble and roll.
Since snow has decided to stay with us forever from now, it was no big surprise that more than half of the track was covered with thick layers of muddy snow. It was fortunate enough though that the Hare My Sisters Glowing Cee U Next Tuesday revealed that this run was a backwards repeat of a thing she had set a year a two ago. Sex Energy and our Fallen Angel, teamed up with all of the Sex-O-Phone family took an easy break at a slightly muddy playground nearby the carpark. Credit to them to have made it all the way up the hill to the start of the run.
"You know, it is all Molotow's V*ginas Fault since SHE wanted to set a run in ze Prater somewhere bu since she left for a trip to Bangkok what can one do?" or so I heard the Hare say.
The usual passing by of the Jubiläumswarte followed, with the usual suspects going all the way up on top. After lots more snow and mud on the way back on over the Steinhofgründe and eventually back to the car park, the circle - with Richard Kopf beating Flying Durchman in the race for the last place - featured the second Hasher who reached his 1000th run here at the once World's Worst Hash.
Munk is second only to Lord Glo-Balls (OVH) -look out for him- 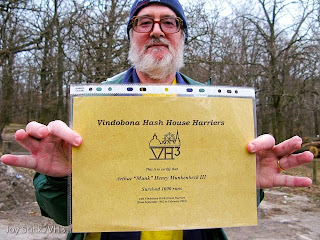 to have reached this magnificient number and it remains to be seen when the official induction ceremony into the Order of the Vindobona Hash shall happen. Stay tuned.


In the meantime, admire the official Handshake: 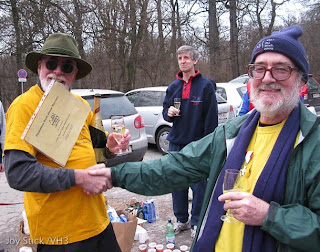 Let's have this rounded up with the Jean Goldkette Orchestra in a recording from 1926, featuring the Keller Sisters and Al Lynch and of course my eternal Hero Bix Beiderbecke.
Posted by Marie Tamponette at 21:12 No comments: