is not really related to the run last monday way out in Bad Deutsch Altenburg but rather a song title on a 1986 record by Bob James and David Sanborn called Double Vision that I am just listening to. It is relaxing music that makes at least me smile and every Halfmind who is related to the Vindobona Hash should know how important it is to give birth to a smile ever so often over these days. 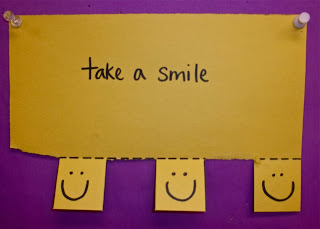 RootCAnal and her ToyBoy Free Willie set yet another trail not too far from the Slovak Border and I was fortunate enuff to be able to travel down and - find out that the Hares, obviously acting in full good intention started to hand out glorious cool beercans before the run even started. That made some muttering audible such as: "Errr, wot do we do if we run out of beer? Supermarkets are closed and blah blah,," "Well, where's the next gas station?" "Hey, that's a NICE idea, next one is just down the road in Hainburg. If we need any supplements we - those in charge (not me!) go down and get some!" Somehow the necessity never arose, yet at the shortish circle the remaining cans quickly vanished. But Richard Kopf tends to overdo these circles anyway, sometimes way too long for my taste, GONG OR NO GONG! 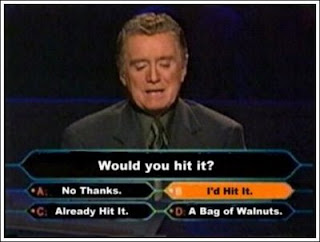 Well, at the run start (LGB: "We're always forced to run up the EFFING hill!!") it appeared that no marks at all were apparent. Meaning that the Hares had dedicated their energy to mainly put flower down at Checkpoints, more or less completely ignoring regular run marks. Fair enough I thought as the Hash Lemming crowd followed one another on straight to a very busy main road (the B9 actually) which required real attention to cross to the other side onto more terrain without more or less any marks. 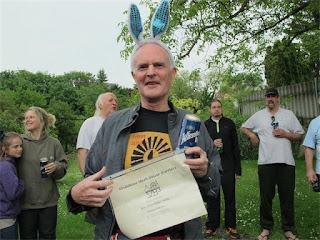 The growing bad impression of all this was soon reconciled by tales of some Vindobona V.I.P.'s stag night trip to Kiev ("Well, she wasn't half bad, she received some 500 in whatever currency - perhaps Italian Lira!


Posted by Marie Tamponette at 22:50 No comments:

Death always comes at the wrong time or moment, mostly unprepared. I am by no means a psychologist nor am I overly faithful. King Gook aka Danny first crossed my Hashing path in Vienna in the later 1990s when I joined the still to be labelled World's Worst coming back from a foreign assignment in Paris.  There were these, well, strange figures running around the Hashtrails of Vienna such as No Mercy Master (left to the Middle East 14 years ago), Wankshaft (the most Viennese German I have ever met, sorry King Ralph), Smelly Cheese (still around somewhere) and the hard core folk like Munk (not yet Cardinal), Glo-Balls (not yet a Lord), Stormin' Norman (still awaited his sainthood back then), Richard Kopf (for a week I thought that this was his real name!, not yet XX for years) and of course this odd Philippino looking Austrian named Danny "King Gook".

During my first full Hashing year here in Vindobona in 1997 this Hash and its representants grew on me and then cameth that fateful weekend in late 1998 in Mönichkirchen (the Viagra Weekend, look for the old Rehash in the respective Section of the VH3 Website), duly being organised by No Mercy Master, Munk and King Gook, who wore prisoners clothes during the registration. (Munk was dressed as a Jester, mind you).

A short excerpt from that writeup:

"Slowly but true all those participants started to arrive and there was a Highpoint of the weekend when JR, our Golden Great Hash Cash and Webmaster, was paying his fee to King Gook.  "A DREAM CAME TRUE! JR's PAYING ME!!" (Quote King Gook). "

At the following AGM King Gook actually candidated against LGB and wanted to take over Hash Cash, we all know the outcome.

King Gook was a great character and a real pleasure to be around with, for years and way before I started doing so he was a regular at all the Schweizerhaus openings and closings and he always amazed me on how quickly he could sneak away from table and company.

Once his illness made him too weak to turn up even occasionally I was still pleased and privileged to hear news about him through Cardinal Munk.

Dear King Gook, Rest in peace. Thank you for having been a friend. 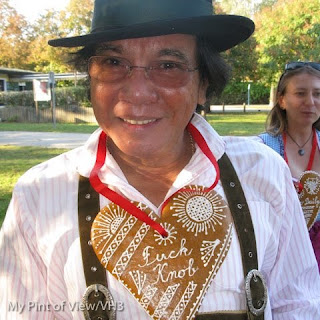 Posted by Marie Tamponette at 23:18 No comments:

The latest edition of the Wiener Bierfest is coming up later this coming week.

Viennas first district seems to hold lots of different attractions throughout the year, such as the Stefflkirtag which currently goes on until the end of May right next to othe Stephanskirche.

The following musical piece has got absolutely nothing to do with the above, but I find it really cool.


Posted by Marie Tamponette at 19:17 No comments:

The Beauty and the East - "I can't complain "

"after all i have organised this". Said one of the - organisers. :-) But let's just first start with some weird Elvis facts.

1. Elvis was a black belt in karate. He took up martial arts under the shotokan sensei Jürgen Seydal, while fulfilling his military duties in Germany in 1958. He was awarded his black belt before he returned to the United States, in 1960, by the chito-ryu instructor Hank Slemansky. Elvis’s love of martial arts continued throughout his life. His favourite form of fighting became American Kenpo.

a) Despite running with the World's Worst Hash (yes, some things seemingly never change) for nearly 20 years, I learned that in 1992 there was already a first weekend in Senec which must have prompted Richard Kopf (no, I won't call him XX!) to join the VH3 two weeks after that event. Our erudite Masthead decided in due course that it was time to revisit that location more than two decades later.  Elvis was the theme and I counted no less than 7 different Elvis impersonations, a Karaoke contest was about to follow on the Saturday evening. 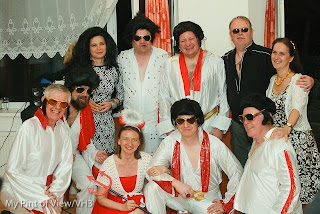 Arriving with the family on Friday early afternoon after a slighlty chaotic drive thru Bratislava (sloppy D-Erections!) the first way after dropping off our luggage in the hotel room was the pub next year that loosely translated to "Zur weißen Maus", meeting up with those who already got there a little earlier (MOM, Lik'mmm, Weens Schnitzel etc.) and enjoying good and inexpensive beer from the East.

2. On 21 December 1970, Presley met President Nixon at the White House. Presley had initiated the meeting with a six-page letter to the President, in which he had spelt out his desire to be made a “Federal Agent-at-Large” in the Bureau of Narcotics and Dangerous Drugs. During his meeting with Nixon, Presley denounced The Beatles as being ‘un-American’ for their open drug-taking and anti-Vietnam politics. For his part, Nixon reminded Presley of his need to “retain credibility”. Nevertheless, he is said to have given Presley a ‘Special Agent’ badge.

One after the other all 69 (!) partakers of the event arrived, Fallen Angel succesfully tried out her waveboard on the nearby skating area and by 7 p.m. dinner was about to start, of course supported by Slovak beer on tap.  The suqsequent pub crawl happened without us, yet I heard from a small group that went astray (Rowed Runner, Hitman, Cardinal Munk (OVH)) from some serious drinking. 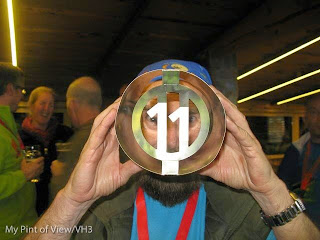 If you make your first eleven...


The next morning featured a bus ride to a castle called Cerveny Kamen (Bibersburg), easily 20 kilometers away from Senec. Initiation was given in form of Borovicka Schnaps shots, the "stuff that made St.Norman drunk at Senec more often than anything else". Point A on one of Free Willies infmaous main runs on these weekend events.
To give that gent minor credit, he was only responsible for the first half of the runners trail, with Fyling Dutchman being the Main Hare for the second part of that runners trail. (POINT OF CORRETION HERE: Free Willie pointed out that it was rather Mind the Gaps turn for the seconc half of the runners tral, with Fliying Dutchman acting as sidekick.) A walkers trail was being offered too by St.Norman , with the addition of a "walkers plus" trail neatly set by No Balls Prize after an extended drink stop somewhere deep in the woods.

3. Elvis’s first radio play was on Memphis station WHBQ, on the Red, Hot and Blue Right”, Show, in 1954. DJ Dewey Phillips played “That’s All and, a week later Sun Records had received 6,000 advance orders for the single “That’s All Right”/ “Blue Moon of Kentucky”.

Point B at the end of the run/walk was a Gasthaus, hidden away somewhere in the forest with more beer on tap. Everyone was in for a treat in due course when Goulash with lots of garlic was served so everyone could happily stuff their faces. The highlight of a long circle with different RA's handing out drinks to each and all was the Hash engagement of GrandMeister Multiple Entry with Feel My Meat from Moscow, with a wedding date due sometines later this year.

Multiple Entry won the Elvis Karaoke via Appplaud-O-Meter (personally I thought that Septic Yank was doing an ever greater job) with the 6 others all finishing 2nd.

The same time that the Hash function was on downstairs on Saturday night there was a local wedding fest happening in the main room, intially quiet. Later in the night, back in our room I had problems to distiniguish which party group was about to rip the hotel to pieces, the loudness level at 4:30 a.m. was by all means impressive.


4. The King’s entourage were known collectively as the Memphis Mafia. All members of the Memphis Mafia sported diamond and gold rings, given to them by Elvis, on which a thunderbolt and the letters TCB had been imprinted. TCB stood for “Take Care of Business”.

A mild hangover walk into the town of Senec and by loop bacl to the hotel concluded a sunny weekend event with lots of good strong local beer. Thank you is to all the orgnaisers Hares and all who made it to Senec. 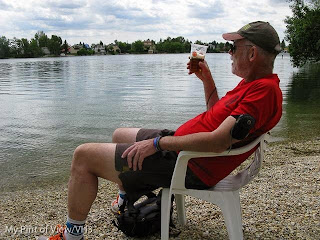 He likes to watch

Posted by Marie Tamponette at 21:51 No comments: