Just for comparison matters please check out the the clips below, one is a hell of an impostor (in Hashrelated terms only) yet a godly musician and the second trio, well, grew a little tammie since 2004, errrr..

And here come the real guys, or...
(Unfortunately, no more audio available for this track (sob!)

Posted by Marie Tamponette at 12:16 No comments:

We're planning to go to the seaside for a week (health of the family permitting) so no more Hash related news for a few days. Stay curious and thirsty and try to hit the Good Life.

Posted by Marie Tamponette at 23:50 No comments:

On Norwegian National Day it was left to the Hares Harry Tosser and No Balls Prize to come up with a run that started in front of the Johann Strauß statue in the Stadtpark. Loads of Norwegian flags were handed out and a short little jog down towards the Donaukanal and then further on towards the edge of the Prater ensued.
There the gang bang bus waited with more Norwegian flags, the fantastic Dizzy Izzy Game, a big rope (for the tug-of-war) and a little parcours that waited to be used for a sack hopping competition (photographic documentary provided as mostly all the time by My Pint of View). Not to forget to mention the nearly cold beer!

Start it all off with the song stop. Feel free to comment and/or provide a suitable translation. I just couldn't be bothered as I did not want to take away this beautiful lyrics' magic. 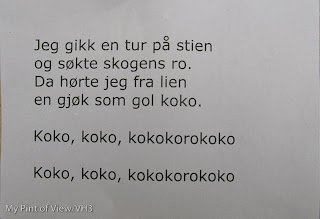 To be followed by the nicest looking Norwegians that never were: 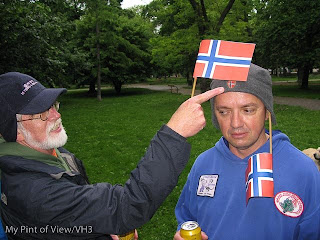 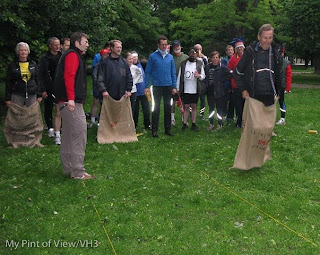 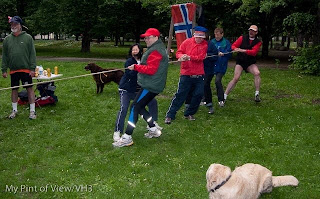 After this hilarious interlude it was on back to the Stadtpark, yet the wrong way which was the out trail. The usual longish Richard Kopf-led circle followed until we were allowed to wash our blues away at Flanagans.

On Out.
Posted by Marie Tamponette at 23:13 No comments:

Wot's wrong with a little rainfall in May may I ask you? Just to whet your appetite I shall take the liberty to include a recent and brandnew pic from our very own Mr. Smile a bit further down. To be honest - which I am not supposed to be here folks - I have to give the Hares Mind the Gap and Casting Couch credit for trying out a bit of a variation which took the trail off the Donauinsel near the Nordbrücke and into the 22nd district which contains the Floridsdorfer Aupark and after crossing a major intersection near the Floridsdorfer Spitz, right into the old Wasserpark. Led by Mr. No Balls Prize, Gangster and Flying Dutchman, the crossover back to the Donauinsel and eventually back to the carpark happened in no time. Not too much variation possible with setting trails in this area IMHO.
The circle in the pouring rain mainly featured the unexpected appearance of My Pint of View and Circle Jerk who happened to drive to Brigittenauer Brücke (wring starting point) and then walk on over all the way to the Floridsdorfer Brücke. Tuff.

Posted by Marie Tamponette at 21:55 No comments:

I actually wasn't even aware that the Währinger Park existed, let alone that the Fischerbräu (one of Minuteman's favourite hangouts for Jazz Brunches) was so close nearby. Anyhow, very accidently Sex Energy asked me: "Fallen Angel is staying overnight with her grandparents, so why don't we do the Full Moon Run?".  All I could do other than gawk in disbelief was to keep her asking on our way out to the 19th district :" Are you really sure you would like to make it there?".  You know the answer as I am writing this, mainly for myself.
Amongst lots of familiar faces at the start I made out Death to Flying things (whom I first mistook for Needleman) and Anita Hanjob with her son, a keen runner indeed.
Running up and down and seemingly all over Döbling, nearly invocating Christian Eipeltauers Ghost again (we COULD have gone there after all!) and, having admired some Gemeindebau architecture and some HUGE villas of the rich and famous people, a beer stop came up with actually COLD BEER - well done Hares! - and the way back should have been the literal piece of cake - were it not that by following Ice Queen and Slush Puppie at least I lost orientation for a couple of moments until we got back to Währinger Park and it was only when Sex Energy phoned up saying "I got lost within Währinger Park" I realised that Whoppa and Pocahontits shared that remarkable experience.

A Full Moon circle can be a laid back experience and usually lasts much shorter than its equivalent at the once World's Worst Hash. Beer and lots of Food at the Fischerbräu concluded all of this.

Ah, start from Schwedenplatz! Try to find a parking lot nearby (don't forget the Parkschein unless you're keen on getting a parking ticket) and then get down the steps to the ferry station and meet lots of familiar faces.
The long initial stretch alongside the Donaukanal made up a bit for the drive to the venue and things brightened up - not just because the rain had stopped - when we were sent over to the 2nd district to the confines of the Augarten, right next to one of the Vienna Flaktowers.
High hopes at least a few of us had when we were sent on back towards the Karmelitermarkt in direction home, and even a beer stop was being held at the back of the old Kriegsministerium.
Alas, the endeavour led much farther and on over into the Stadtpark presumably and this is where quite a few brave ones, including No Balls Prize, Lady GoDiver and... gave in and took the short way back. The treat of the evening was warm Heineken Beer  - sorry lads - but I am just reporting the actual happenings.
A visiting pair from San Diego must have liked all this so much that the payed the entire Pizzeria Bill afterwards, at least so I have been told.

As you can see, it took me a few days to come up with some halfway coherent thoughts about all this.
On Out. 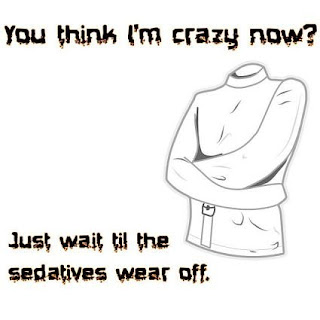 Posted by Marie Tamponette at 23:06 No comments:

The Other Way of Stopping

A scenery that reminded a bit on the old days of walls and barbed wire fences, which is a part of the building site for the Lainzer Tunnel marked the meeting point for Sex-O-Phones run on April 26 at the end of Speisinger Straße in the 13th district.
A little rain before the run started must have washed away a bit of the flower as it proved a bit tricky to find some markings blah blah but, to add a well-deserved nice point to this run, the Hare(s) (S-o-P + Family) took us around and up the Roter Berg, 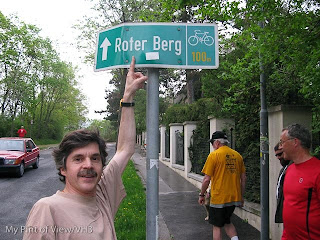 a vast green are with nice outlooks over the western part of Vienna. On up to the hilltop and then meandering back along the little backroads of that part of town and on towards the Wolkersbergenstraße and the Lainz Hospital. Does anyboy still remember the run we once had there years ago and the circle on that small sort of park where suddenly all the locals where our best friends (and wanted to drink our beer)?
After an hour or so it was back to the - longish - circle which was concluded in style at the fine Restaurant Waldtzeile. As far as I can remember, Father and Son from the pic below (one half of the Hare Family) enjoyed their food as well. Yet, that pic was taken before supper. 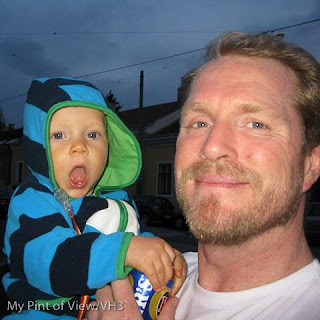 On Out.
Posted by Marie Tamponette at 21:35 No comments: