I can't help but to recommend another piece of really cool music stemming from, well, Birth of the Cool by my Hero Miles Davis.

Being a little sentimental here I am reminiscing about the old days when I used to typewrite, copy, and distribute Rehashes to the ogling masses of about 3 Hashers. (Maybe a few more than that).
On On to the Schweizerhaus tomorrow and of course to the Schottenhof on Sunday.

Until then.
Posted by Marie Tamponette at 20:36 No comments:

Alors les mecs! After quite a successful Whine Hash weekend down in the lovely province of Steiermark in April this year that was being organised by three little mermaids (we know who they are) it had been decided by the powers that be that yet an udder event shall be hosted, namely in Melk.
The theme was cleverly disguised as a French-related one (ah, Paris!, Napoleon invaded Ostrich country in 1809, maintenant c'est 200 ans apres, d'accord?) I think to remember that a wee little side comment by our remarkable RA Richard Kopf (and that sure IS his real Hashname and none other) said something like Vindobonapart.
All said and done, mid September brought some 50 Hashers from various clubs to Melk to that charming little Hotel called Wachauerhof, and the Friday night happenings went by without Sex Energy and myself since we left our little daughter Fallen Angel on Saturday morning with the Grandparents and it was on off to Melk.
Nice main run out there through Melk and surroundings that was set mainly by Free Willie leading out of town and on over a brdige across the lovely Westautobahn (one of Austrias main motorways, yet only a short interlude) and eventually over to the Schallaburg, an interesting place that hosts many exhibitions and hoh hoh hoh a large Napoleon exhibit was the main attraction over there.

"The beer stop is to be found at carpark # 5!" was muttered by someone and another 500 metres later there was some cold beer. FINALLY.
Think that was it? HAH! I laugh in yer face! "In case anyone wants to run back to Melk that would last another 1 1/2 hours running and a little longer for the walkers" - so I assume, since there was yet another very fine option out there.
"Haw-Haw, there is a Bus weserved for Mr. Norman Wandall leaving at four o'clock!" was being declared some two hours earlier. Plus the beer stop had been dismantled by some not well-meaning ones, so what could one do but grab a few cool ones and drink the time away until the Hash Bus departed? Fine and long circle, check out the pics from that weekend at the Hash Photosite. Link to follow.
Honestly speaking we have already had better evening entertainment on previous events, the evening party was a bit sluggish as fas s I am concerned.
Anyway.
Good lad Sex-O-Phone and myself decided to give the Hangover run on Sunday morning a miss and walk on straight to the endpoint which was the local rowing club next to the River Danube. What a wise decision since the Hares (Joystick and affiliates) had set a trail that lasted more than an hour.
Another circle in style and then it was on off for all. I took the train back to Vienna in the company of the Bintang Kidd, Sex Immigrant and Marathon Main (currently being posted in Cairo).
Conclusion: Bien fait et merci a tous et a toutes.

On Out.
Posted by Marie Tamponette at 16:16 No comments:

Over the coming weekend I will try to come up with a short recollection of the past away Weekend that the VH3 has had in Melk in Lower Austria in mid September, some 80 km west of Vienna.
In the meantime I am looking forward to the closing day of Viennas most astounding beer garden which is the Schweizerhaus (www.schweizerhaus.at) this coming Saturday. Madness and Oompah Music. Will try to cover that briefly as well. If my computer won't have met its maker before then.
Just listened to Exile on Main Street by the Rolling Stones. Let it Loose being one of my favourite tracks. 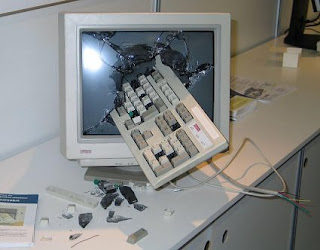 Posted by Marie Tamponette at 07:51 No comments:

You may or may not well know that the Vindobona Hash has been founded in the spring of 1982 and two of our errrr... members in their middle years have been true and faithful ever since. I am of course referring to Munk and Glo-Balls. The former a tame Southern Canadian from Brooklyn NY and certainly more Ostrich that human, the latter Mr. Vindobona Hash in many respects. Not only does he maintain the local Hash Website, Hash Cash, Run Stats and such, he certainly is one of the most organized people when it comes to Hash finances and the like.
Well, a few weeks ago he reached THE magic number in any Hashers life, namely run # 1000.
Sunday last week saw a fitting knighting ceremony and GB had been bestowed upon the title of LORD GLO-BALLS; Order of the Vindobona Hash. Time will tell if those who are getting nearer to that number will be allowed to join the noble fold. Like Munk and our dearly beloved Grand Meister who goes by the name of St.Norman.
Glo-Balls hared that run out near the Autokino in Groß-Enzersdorf and there is not much you can do wrong in that area trailwise. A relaxed 50 minutes or so later back at the cars, lamenting the sorry fate of pissy beer (choose Not oder Elend between Egger and Pittinger) the knighting ritual was charmingly being put together and performed by Munk and Lady Go Diver. If Mind the Gap can get his act together then one fine day you may be able to see a few pics at the Hash Photosite that can be found here: http://tinyurl.com/yzczu9c

I am a newbie to blogging so please bear with me if you miss any functionality on this site. It'll continue to grow.
On Out for now.
Oh, and do try to give Roxy & Elsewhere by Frank Zappa a listen. A truly fine album.
Posted by Marie Tamponette at 23:55 3 comments:

Hi-de-Ho out there, after many years of putting together Rehashes that still can be found in the respective subsection of the Vindobona Hash Website (check out www.viennahash.at) and a long hiatus I thought it would be a nice idea to start a blog to share some thoughts about life, the universe and everything.


This blog will serve mostly to document the happenings at the local Hash here in Vienna with some occasional excursion into other areas of interest.