Spring is getting nearer

as you can see by the following link: http://www.steiermarkdorf.at/
This year from April 15 - 18 on Rathausplatz, mark your diaries. Looking at the pics from yesterdays run in Hirtenberg (look for the Hash Flash Photosite) one could say that there was a little snow and ice around. What the heck, there should always be time to do a little shopping afterwards (see below).
Looks like the Order of the Vindobona Hash (OVH) will soon be extended to a second member. Watch this space. 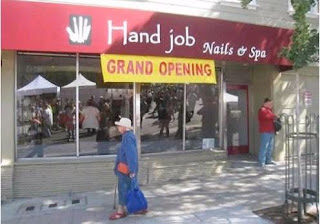 Posted by Marie Tamponette at 17:49 No comments:

Though the title of this entry is an old song by Mr. Cab Calloway I am putting up a couple of clips by the late Zawinul Syndicate when the were playing here in Vienna in May 2007 and, afterwards, the same song in a duo version together with Mr. Trilok Gurtu. Absolutely amazing stuff.
I just like to have some good music in the same place without searching too long for it.

Posted by Marie Tamponette at 22:53 No comments:

Well, here we are. We're safe and sound at last in the soothing vicinity of our very own Hash House.
Mind the Gap and Kun't Tell Ya set a quick one (run that is a on January the tenth) down in very well known terrain, yet it is always a pleasure to return. A short and pleasant jog, never too far away from the carpark followed and lasted not longer than 45 minuites. You are encouraged to go to the Hash Flash Photosite (Link to the right a bit further up on this page) and check some part of Vienna in wintertime. Lady GoDiver bogged in her car a little bit in the snow and of course there were plenty of helpful gentlemen around trying to, well, unpark her car? (See Pics at the Photosite).
Is there anything more to say than that the VH3 Hash House may equal our bungalow of dreams? (recording from 1926 - I think - with my hero Bix Beiderbecke).

Posted by Marie Tamponette at 21:53 No comments:

A dear tradition has started in early 2002 if I remember that correctly, namely that (My) Sex Energy organizes an annual walk on Epiphany day starting mostly from Guntramsdorf (or Mödling trainstation) leading mostly on over the Anninger with the obligatory rest at the Anningerhaus.
If you ever make it up there then do try the Peasoup (Erbsensuppe). Truly Delicious.
Just Bob and Just Raija joined the fold as well as the Kunt Family minus the Great Kuntini. Taking the easy way into the Weinberge and up to the Richardshof then downhill again into Gumpoldskirchen and it was time for a decent winostop, comprising of tasty Cabernet Sauvignons, Weiße Spritzer and Liptauerbrote. 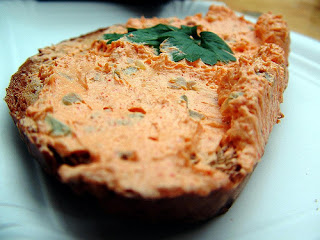 Not much to report other than leading enjoyable conversations with all participants, then getting into Baden, taking the reliable Badner Bahn back to Guntramsdorf and finishing the day off at Baitschev, venue of many an OnIn in the past.

Thanks to our cowinowalkers and all of you feel free to join in next year.

Posted by Marie Tamponette at 22:38 No comments:

Turn it on Again

at that biggish Church out at Hafnerberg. Where the frog is Hafnerberg to be found I hear you asking? Iif you are from Niederösterreich you may know that the way to Hafnerberg leads also further down to Mariazell .
And we all know of course that not only the Ötscherbär is to be found in and around Mariazell.
The pleasant drive to the venue through Alland may have lasted a bit but was rewarding when the aforementioned Church came in sight. Some introductory words by the Hares first and then on very much up the nearest hill and into the forest and further up until a Druidenstein named Fuchshofnadel was chosen for a Hashview, nice place indeed.
Further on over a windy field led by King Ralph and on down (and up again) into the snowy forest, having a short chitchat with our dearly beloved Grand Meister himself and then it was another slippery downhill path that made one or two people fall (where has my memory gone?)
Eventually Little Tichard and Tickpleaser, followed by yours truly and King Ralph made it downhill first and when Dr.Kunt with the Great Kuntini came our way my thought was "If that kid can do it the we can do it too" and the carpark ws reached shortly after.
Shortish circle (45 minutes) in the freezing cold. New surroundings, new views. Thanks for all that Jazz.

Mr. Bing Crosby sings a little tune at the end of that wonderful movie called High Society.
On out.

Posted by Marie Tamponette at 21:06 No comments:

Back with a bang 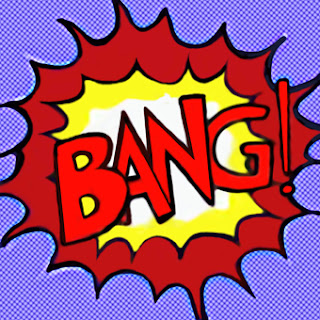 First of all, Happy and Hashy New Year to all of you out there. Over the last few days I even spent a few minutes - well, 2 seconds rather on what happenings I remember here at the once World's Worst Hash over the past 10 years. Good old Canada Dry (who?) has already left back in 1998, to be followed by No Mercy Master and Cheeky, Mr. Davolino Mr. BOB Davolino and Frequently French, my special amigo Minuteman and all those other remarkable personalities that have helped to shape our Hashclubs well-deserved and once world's worst image.
Well, returning to the subject of the glorious Red Dress Run that always leads once around the Ringstrasse in the centre of Vienna. About 25 left standing made it, minus the prominent absentees Lord Glo-Balls (OVH), our dearly beloved Grand Meister himself and Munk.

After the ususal photo shoots and a couple of warm-up beers it was on off with the obligatory climbing rope, provided by MTG. The sight of a singing crowd dressed all in red hanging on to a rope was enough to put a smile on many bystanders faces. Unlike previous years there were no defectors on the run meaning that the pack managed to stay together - at a reasonably slow pace - and we all crossed the finish line sideways and nicely blocking off the road for all the other runners. Take a look. 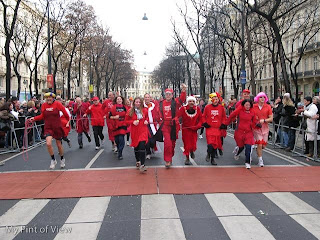 The circle was a loose affair back at our old spot next to the winners podium inside the Ringstrassen Gallerien and it was after half an hours already that two friendly security guys tried to chase us away and I unsuccessfully tried to bribe them with two cans of Coke. Remember the one that came along a few years agao when e were feasting upstairs? We poured him a few whisky shots, gave him three beers and since then he was our very best friend.

Tequila Sunrises were mixed and poured and very tasty, beers have been consumed in plenty and yet another fine on after at Flanagans concluded the Hashing year of 2009. And I can report that I came up with one of my worst Hangovers of the past few years.

Make this year a singing one, just like Charles Trenet.

And don't forget to keep your Sunny Side Up!

Posted by Marie Tamponette at 18:46 No comments: