It is the bass guitar the title of this post is referring to. Septic Yank, best Grand Master that the World's Worst never had the pleasure to be commanded by, also happens to be an accomplished bass player in a music group called the Gang Bang Band or the Old Skool. For years we have prayed him to slap his bass guitar following the likes of Larry Graham, Marcus Miller or Darry Jones. The stereotype we (Cardinal Munk, OVH and I) would always get was "I don't do slapping because McCartney never did". Yet there is a remarkable slapping tune out there.

Fair enough of him and Merry Me to come up with an annual run at the Obere Alte Donau starting off from the end of Fultonstrasse. Walkers and runners trails were provided and three merry Gentlemen from the Worlds Worst were proof that one also can get lost on a walkers trail! Occasionally runners were spotted heading into the opposite direction, and while on the walkers trail, Slush Puppie spotted his origins once again. 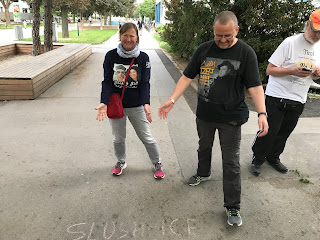 Circle was held next to the Alte Donau (where are the pics to prove this, Hash Flashes?) and OnIn at the inevitable Gasthaus Birner, venue of last years Christmas Party.

Posted by Marie Tamponette at 23:29 No comments:

Flying Dutchman (OVH) sets a run starting from underneath the Brigittenauer Brücke, regularly followed by a barbecue. The occasion following the relaxed Drosendorf event was highlighted by a massive construction area, thereby taking away two thirds of the regular parking lots which caused impressive car park searches by non Hashing Grillmeisters as well as the brave few who did not come by public transport.


Is there a lot to say about an area as well as a running track that has been used seemingly forever, in all four seasons it seems? The fact shines above us that we all are still able to do a bit of exercise, in whatever form and velocity. Likkmm stayed on after the Drosendorf event, Queenie and Tonto made a rare re-appearance and those who are designated herbivores (the last one I remember was My Sisters Glowing K, now lives in Germany) had a hard time at the On After which of course was the Hash Grill. Can the Dutch be funny? At least funny Dutch phrases are swirling around, let alone some Dutch courage if you are to ask your boss for a pay raise. Moronic pics about this run to be seen here.

Posted by Marie Tamponette at 21:22 No comments:

When it was announced some time ago that the World's Worst next Hash weekend (and since the late 1990's onwards we learned to hold these events away from Vienna, to give everyone a jolly decent time and to prevent the locals from going home early if they'd fall asleep unallowed) the name Drosendorf was mentioned. At first I thought "Hang on, we've been to Melk a few years ago and Drosendorf is just a few kilometres away from Melk." Only later I realised that the Organ sizers had another Drosendorf in mind, the one that is located up in the Waldviertel and next to the Czech Border.

After a two hour drive from Vienna - and I have to admit that S.Energy and I had been asked to set the Friday evening run so we couldn't help but travel to the place in advance to reccie a bit - my initial skepticism turned into being pleasantly surprised about the beauty of both the city and the area. Mind you,  Drosendorf an der Thaya lay directly next to the Iron Curtain which meant a lot of no go area) and, after that curtain came tumblin' down, became a national park (Thayatal) on both sides of the border. Lovely indeed and much to be recommended, the locals advertise their city as the old-fashioned "Sommerfrische" and I can clearly see why. 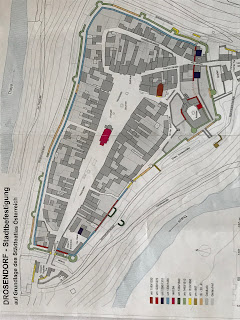 Enough of that chatter already. Billed as the counterpoint to last years Eurohash extravaganza, a small and selected group of no more than 35 (if even) arrived mostly on time and the Warmup run started leading out through the town walls and downhill towards an early 1970s and deserted looking public swimming pool. Imagine a place with several half empty concrete pools with green slimy water inside that was open to everyone with absolutely no-one there, apart from the World's Worst crowd.

After a light jog alongside the Thaya and briefly uphill it was on alongside the town walls and eventually inside to some more lovely views, the OnIn came up in no time and the circle was held inside the Hotel Zum Goldenen Lamm. 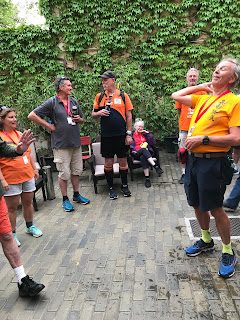 I wanted to do the long and torturous Saturday run of 25k (announced as such) but couldn't due to a bad cold. What the heck, the walkers group had the immeasurable advantage and pleasure to ride the Reblaus Express, a local nostalgic train with the special feature of a Heurigenwagon (being served by different winemakers every week) so the overall mood was elevated when we arrived at the designated stop to commence the official walkers trail. Long and straight concrete trails, embellished by razorback enclosures (with adorable piglets) that made the way to a Heurigen where we met with runners again look like a Sunday afternoon stroll.


Locals Wines were sampled and typical Heurigen food (Brettljause) was had by all and after that it was a common walk back to another train station where the circle was held. The highpoints of this circle were the namings of 7 Up (Just Monika) and the elevation of MOM into the fold of the OVH (Mother Superior of the Order of the Vindobona Hash). After getting back to the hotel we left early for Vienna so no report about any evening debauchery and/or Hangovers on Sunday.  An enjoyable weekend it was, bar none. 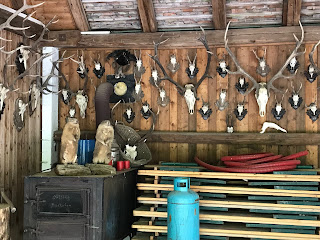 Posted by Marie Tamponette at 22:42 No comments:

The Rite of Spring

One cannot say too much about the opening of the Monday evening run season. Well is it known to everybody far and wide that we always celebrate this occasion up at the Grüß Di A Gott Wirt, with the way leading up the Viennas highest elevation point, the Hermannskogel. Four Hares, namely Tickpleaser, MOM (Sektschlepper), Cardinal Munk, OVH and yours truly tried to live up to the high standard which we always try to achieve on that day. Taking into account - of course - the musical piece that is the title of this post.

Up there on the hill top as always there was Sekt, Cake and Song. A merry time was had by the lot of you who made the trip and, as always, friend Stephan who is the owner of the Grüß Di A Gott Wirt opened up his place for us on his day of rest. His restaurant usually is closed on Mondays. See you there next time.


Posted by Marie Tamponette at 22:58 No comments:

This run which started from the trainstation carpark at Wolf in der Au, somewhere in the 14th district of Vienna was hared by Mr.Pink and (presumably) Morehair Richard Kopf, OVH. Before the start of the run it was announced that there were a long, tiresome yet spectacular runners part and an easy does is walkers trail so make your choice. There was nothing to complain about the first part of the trail, which crossed the Linzer Strasse and the railway line, leading into streets with one remarkable street sign as shown:


All fair and well we went on to reach to Mauerbach, a charming little waterway with a running path and some old bridge constructions which if still in occasional use look highly dubious to me. At the end of the Mauerbach walkers trail Hare Richard Kopf lost his sense of direction (and his mind for a little while) and all hope for a decent continuation of the walkers trail went down the tubes when no more flower dots, blobs, signs were to be seen. Accordingly, since that area is well known to experienced Hounds of the World's Worst we all went back towards the main road (Mauerbachstraße and then Linzer Straße) to the carpark.

I later learned that six or seven stalwarts survived the runners part which must have taken them well over two hours. Well done everybody. I had to rush home before the begin of the circle so not much more news from this one. 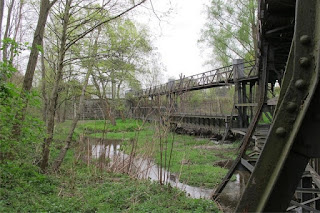 Posted by Marie Tamponette at 22:44 No comments: