The great Cultured, a former Hashfriend in Paris used the title of this post for a writeup for one of his stories several decades ago (at the Paris Hash). Still I am happily reusing it for last weeks run which was located quite close to Vindobona and yet Terra Incognita for most of us. Getting out of Neu-Purkersdorf and into the green pastures of Irenental brought along a place called Jausenstation Hoffmann which is located at the end of a valley, with promising paths and forests all around.

Holy Roamin' Empress, OVH and Slush Puppie are amongst the precious few (Kuty Pi being another noteworthy example with her spring run a few weeks ago) to come up with new locations and examples of the wonderful variety that the area around Vienna has to offer. In fact, after finishing this writeup I will take off for a long walk myself, to be accompanied by Hash Hound Just Melios. ;-)

Due to brilliant spring weather more and more Hashers came along, some we haven't seen for a long time (Tonto plus daugher, Finger Me with her sister and a few more, including two visitors from a Washington DC Hash who are currently running in Belgrade). In the end it must have been a crowd close to 40 and off we went into the hills, neatly split into a runners and a walkers trail. Scenic and steep ascents and descents were leading us all the way further uphill, allowing for panoramic photos and scenic views. One highpoint in the truest sense was getting up the Troppberg (542 metres) with a look out platform that went up another 50 winds metres. Again, great views.

After panorama came more running and after even more puffing and running it was time for the much anticipated Eierlikör (Eggnig) drinkstoop, a regular on Eastermonday runs. After the Eierlikör was finished and another 20 or so running minutes it was on back to the carpark. The circle ran out of beer quite quickly, so King Ralph came to the rescue by handing out Schnaps DDs in plenty. Official Moron pics can be admired here.

</
via GIPHY
Posted by Marie Tamponette at 13:47 No comments:

Sneakin' out of here

More pics from recent excursions, the first one was taken by S. Energy (and a comparison was drawn to a Vincent Van Gogh oil canvas by a former friend of the great Fontainebleau Hash House Harriers). 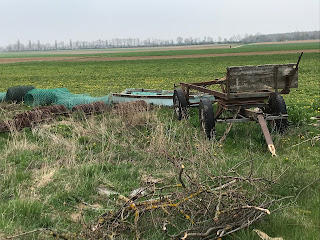 via GIPHY
Posted by Marie Tamponette at 21:41 No comments:

One in, one out

After one or several beer mile events in Vindobona (I know of at least two, one is reported about in this blog somewhere) Barefoot and Mr. Pink called for the first local edition of the Bierkistenlauf (Kastenlauf as the German equivalent) where the noble goal is - ideally split in teams of four - to empty the content of an entire beercrate (20 bottles) on your way to the designated finish line. Have a look at this educational video to get an idea of what this is all about. 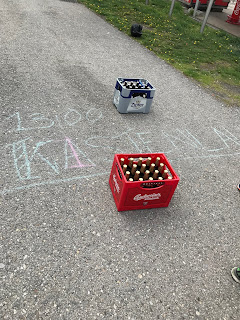 Starting off from the Würstelstand near Ernst Happel Stadium, a group of twelve stalwarts made a fitting selection of three teams, with a young quartet from the British Isles being the most dedicated, closely being followed by Mr. Pink and Barefoot. Yours truly and Hash Mate Bloodsucker completed the second team, with Walrus, Victorias Secret, Moehar Richard Kopf (OVH) and Just John from the Scottish West Coast constituting the third team.

Off it was to run (or walk, but mostly enjoy the beers) on a fine set trail with flower and coloured chalk, soon after the beginning cameth a few obstacles in form of rather steep climbs up and down various rope ladders on deserted children playgrounds, of course all the time carrying beercrates and bottles with you. Bloodsucker and myself took it the easy does it way,  and we reckoned we'd be well on our way when we saw to youngsters team whizzing by quite late on the trail with their beercrate still being more than half full.


At long last (and, to repeat myself, at the end of a fine trail in the midst of heaps of wild garlic) we were nearing the finish line and realized we had come in second, some 10 minutes after the winning team. I'd like to emphasize the neatly drawn finish line right next to our very own Hash House near the Lusthaus. 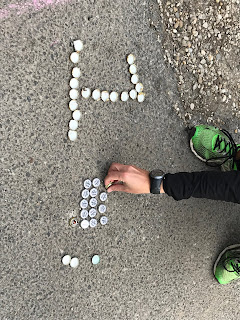 The afternoon was merrily concluded at the Hash House, with more Hash friends coming by, such as Sinex, Multiple Entry, Rowed Runner, TB Saint Norman (OVH) and the Barefoot family. I enjoyed myself a lot. Thanks for the idea and the organization. To be revisited sometimes!


Posted by Marie Tamponette at 21:30 No comments:

Sunday runs in Vindobona always started at 2:30 p.m.; after a vote on changing said starting time forward by 30 minutes to 2 p.m. after the last AGM this custom was and is carved in stone. Or is it not? On a merry cartrip out to the Autokino (former drive in cinema, long closed now) when I picked up KutyPi on the way it dawned on me that - quite innocently during the week - the run start had been moved one hour forward to 1 p.m. due to "family commitments". Fair enough we thought, we were interested to see if we were the only dumb ones or whether other members of the World's Worst would also have been negligent in (not) having read the Hash Schedule?

Well, what can I say? Shortly after arrival it was Root CAnal and Free Willie arriving, plus King Ralph who was a latecomer as well. A deserved backslap to the Hares Tickpleaser (found two ticks on himself the next day) and Prof. DDr. Felch, OVH for leaving clear marks all along the way. The Lobau, area of that run and referred to as Viennas jungle is a wonderful place to run, walk, bike, swim and the like. In comparing this run to previous experiences I noticed that lenghty parts of the trail were set along broad, long and straight walkways, with the occasional thicket added for good measure.

Given the new more or less non-existing running speed of most I was not really surprised that even with a one hour delay we could manage to catch up with the walkers some time before reaching the carpark again. Guest runner Daffodildo, RA of the Cardiff H3 did a jolly rendition of an old Monty Python classic and handed out some Down Downs in style. Plus, she took a swim in her full running dress. Impressive!

Posted by Marie Tamponette at 21:53 No comments: