When the moment is right

June 25. This years date to come back, albeit once a year, to Wiener Neudorf. By breaking the tradition we did not start at the old faithful Figurteich like we always do but rather moved down the road a couple hundred metres to the carpark of the Kahrteich with adjacent Restaurant Oase. All my beloved wifes idea of course. Maybe it is some kind of a deeper truth that guys principally hold onto an idea for a looong while while those beloved females are more spontaneous and - volatile, maybe. But that's just my personal little theory.

Well, the change of the start showed in full glory that there ARE poeple who do NOT read the Hashschedule but much rather rely on something like :"Oh, it's these guys setting their run again so I know that run will start automatically at point X!"! Our own superhero MOM was the one that got completely lost and was seen strolling aimlessly down that secret road in Guntramsdorf where the larger part of the KUNT family is residing. But I digress.

The goal this time was to find out a slightly different route thru Wiener Neudorf. so the route was along the infamous B 17 (Triester Straße) for a showt while and then down along the Mödlingbach and the old part of Wiener Neudorf. After a loop on over a bridge surpassing the A2 it was on back across the backgardens and, eventually back to the cars along a long straight path in that Industrial partk where we once hold that Saint Valentine's run that all the partakers loved so much. Short circle and On After at the restaurant Oase.

Posted by Marie Tamponette at 19:28 No comments:

And then on June the 18th  it was time for that annual sensation somewhere in the 22nd district at No Mercy Mistress's Sauna and Swimming pool, cleverly disguised with and preceded by a more or less shortish Hash run, this time  duly assisted by Marathon Man and family.

As the Marathon family has recently moved in the near neighbourhood it seemed to be natural to incorporate a beer stop at their new home. All said and done, some 40 minutes into running on a hot day, the beer stop garden was merrily reached and duly enjoyed. Finding the right trail after the beer stop proved to be a minor problem as the marks were not clearly visible at first. But that may have been the influence of the liquids consumed right before.

The way back to the OnIn was mostly straight all the way back, giving us all a well deserved chance to enjoy the flat surrounding scenery that Hirschstetten is well known for. Before the circle even started the usual suspects took to the sauna and afterwards for a lenghty swim. Down Downs at the circle were prominently awarded by (ab)using a comfortbale garden chair the belonged to our host. More swimming and a barbeque afterwards.

Posted by Marie Tamponette at 22:35 No comments:

After a short holiday break in May it was back to business up at the romantic scenery of the Krapfenwaldbad that is located somewhere in Vienna'S 19th district on June the 11th. They say that the prettiest girls drop by there in the summer. Well, up to you to find out if that is more than just a rumour.

Due to some traffic related problem I reached the car park half an hour late with everybody long gone. Really wanting to wotk for my circle beers I decided to take a chance and see if I could catch up. On my way out I briefly met Glory Daze and Lopsided Backside who were late as well and decided to go for a short walk.  Catching up with the pack seemed to be no big as after half an hour into casual jogging I caught up near the Cobenzl.

Multiple "I belong to live on Vienna" was here as well as Sinex and The Bag and Merry Marugoto, all on their way back from a weekend chez our good friends from the Zagreb Hash. What seems to be a large part of that forest has been covered it was back into the car park. Circle was being held a little further uphill near the grill area. A neat little goddie style down down routine from Zagreb was once performed, only never to be seen again in subsequent circles.


Posted by Marie Tamponette at 17:04 No comments:

I can only dream in Red

Better late than never they say so here is a late summary of last years annual Red Dress Run on New Years Eve, as always once around the Ringstraße in Vienna. After a span of more than 10 years of participation in these events (okay, it is officially the Silvesterlauf of the LCC around the Ringstraße on Dec.31 each year, but who cares about these minor details?) one begins to see Red Dresses floating all around when one contemplates about it. But that seems be the case with new born babies, freshly grown moustaches and - the cool Pints (not you, My Pint) in the Pub.

Meet as always in front of the Cafe Schwarzenberg at Vienna's Ringstraße, raise considerbale attention from Japanese and Italian tourists and then it is On Off once around the trail, some 5,4 kilometres, as has been the custom over the last years, by holding on to a long climbing rope. This time by inspiration of King Ralph a slight deviation has been taken over the ramp of the Parliament building, much to the amusement of the local bystanders.

The rest of the run showed that this Hash Chapter is slowly turnining geriatric. Richard Kopf should be mentioned for not holding onto that rope but rather tried to hold the rest of the red dressed runners (?) back from what seemed to much exercise on that day for him. At the end of the run the crossing of the finish line happened in all glory as you can tell by the pic. 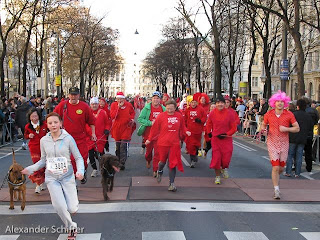 The circle inside the Ringstrassengalerien prominently featured copious amounts of Bloody Mary, generously provided by Glory Daze. I learned only later that she used a mixing ratio of 50/50 for Wodka and Tomato Juice. OUCH! Belated thanks for that hangover! On Out.


Posted by Marie Tamponette at 11:45 No comments: