Where did you get that nice suntan?

No reports for the runs on Feb. 27 and March 6 respectively which I both could not attend. Rather coming full circle with my own Hashing past which is the annual Ski Week Solidarity run that rather unusually was held after the actual Ski Week as we were on holiday ourselves then (but not taing part in the Hash Ski Week).

Similar to the other annual run that I am involved with this one has two main directions where the trail could lead one. More often than not the tradition of a live run is being uphold in the area around Karlsplatz and Naschmarkt, yet four years ago long time Cohare Munk instigated running through the AKH which, for all Non-Viennese is a real big and I do mean big hospital with wide corridors. Great to use once. This time we took off to set ta live trail again from the Votivkirche, covering parts of the extended inside park of the Alte AKH (great Christmas market area!) and got close to the actual AKH hospital but stayed outside and headed back to the starting point by taking a few backroads through the 9th and then the 1st district.

Exact run setting time was thirty minutes and another exact ten minutes later Tickpleaser and Mind the Gap arrived as the FRBs, the former really eager to catch us. 10 more or so followed in due course, the most remarkable onew (Solidarity virgin) were Needleman and returnee Death to Flying Things.

OnIn at the Stieglambulanz nearby. 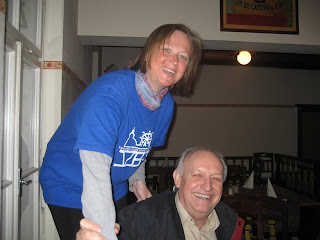 Posted by Marie Tamponette at 20:42 No comments:

Where there is no such thing

A Vindobonian Hash Ski Week that not only should be copyrighted after the success they've had for more than twenty years by attracting Hashing Ski affiliates from near and far is also being preceded by the now infamous Blue Moon Run through some Red lighted terrain in Viennas 2nd district. This all took place on Friday, Feb 25.
The Volkertplatz which also houses the Volkertmarkt, one of Viennas great street markets, yet again was the starting point and the Cafe Na Und the OnIn for to-nite. Familiar and not so familiar faces came by, at the start of the run it was about 20 diehards and on off into the second district. Not so much new or uncommon to write about the track, only when I found out that the Hares Flounder and Multiple Entry had the audacity to exactly re-enact last years happenings. Meaning the same trail, the same house of ill repute somewhere in Viennas 2nd district (with a hefty increase on the beer price, last year I think they charged a fiver for the small bottle to 7 Euros and 50 cents this time, a fifty percent increase!). And the second beerstop up in nearby Pussy Schumis appartment.
The short circle in the cold with no police appearance this time in startk contrast to the last two years just featured a few overly curious boys from the neighbourhood. And then it was on off to the delicacies (?) of the Cafe Na Und's kitchen

On Out to Hashers Night on the Town!

Posted by Marie Tamponette at 20:01 No comments:

Live run? You mean that boldest of Hash traditions where the Hare gets a ten minute head start and then the so called runners will follow, intending to catch and strip the Hares? There once was a proud such tradition here in Vindobona, yet with everyone getting older and slower this tradition was more or less being put to indefinite rest.


Hash Lash Mid the Gap had to announce a Live Run on Sunday, February the 20th starting off somewhere at the Alte Donau and in high hopes a few faithful ones turned up, expecting only the best. Alas, in the best from of a cruel hoax (yes, we do have a Hoaxster here on the Hash!) Joystick couldn't help but rush his charming wife Joyride to the airport to send her off to the Kashmir region again wehere she will to continue to work for Medecins sans Frontiers for a bit. And set a dead trail thereafter (look for trail types in the link). The short reconciliation with this disappointment was to find another watering hole in the 20th district, which is the wonderful Gasthaus zur Alm. Apart from that it was a loop through the 20th district and on back the long way over the Reichsbrücke and back to the carpark.  The Great and Glorious GrandMeister greeted MOM, Cardinal Munk and yours truly with a phrase something like "Did you guys have an extra beerstop?"as he seems to be flying uo and down each Hashtrail like a young god these days.

Anyhow, short circle in the cool and that was that.
On Out.

Posted by Marie Tamponette at 22:07 No comments:

The Beauty and the East

Happy New Year the East Asian Way (The Chinese Way?) with more of the same i.e. meet up at Rahlgasse in Viennas 6th district, run a bit thru very well known area and enjoy some taste food at a nearby Asian restaurant, Hares being Staning There and Slusg Puppie. Don't get me wrong, all of this is very likable. It's just.... winter and the urge for environment when you DO make up your mind to meander around aimlessly should be less the city but slightly more the forest area. Yet all of this is only my two cents of course. Bet all participants had a rolicking good time and stuffed themselves near to blow up status at the On After. It's all speculation since I couldn't make this run. Anyhow.

It's Chinese New Year
May the year of the rabbit
Bring health, peace and joy


Posted by Marie Tamponette at 21:30 No comments:

All seemed happy and everyone seemed to be cheerful down in the Happyland area in Klosterneuburg on February the 6th. A rare chance to put oneself to a Haring caring treat by the charming Bony M. and Hare regular Ice Queen. Sans moi as I had family obligations. No run report this time, maybe just a couple of pics.

On out.
Posted by Marie Tamponette at 23:10 No comments: