Tradition has it that THE (or on of the) first Monday evening runs has to be set up at the Grüß-Di-A-Gott Wirt, well known venue of run # 1 in 1982. Again I was unable to attend but from what I heard from different sources rhymes not with C*** but rather with the following:
Start punctually at 18:30, do not wait for the latecomers but leave a little extra flower on the track, and, us usual, the only way is all the way up to the Habsburgerwarte.
Leave a few not so fast ones behind and meet them again on bottom of the hill (on the other side of course) and then avanti avanti back to the Carpark. Enjoy a few drinks, have a birthday celebrity present (Mr. Soul Survivor of Run # 1 in 1982) 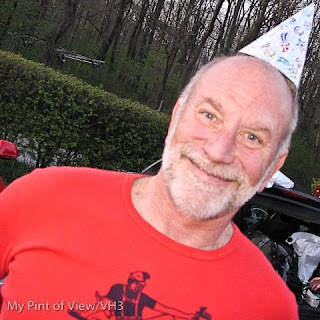 and finish all this off with an extended meal at the Gasthaus.

On On to the Wolf, our friend from Frankfurt who passed away a week ago.

and - bien sur - the local equivalent being led by Mr. You Know Who:

Posted by Marie Tamponette at 23:01 No comments:

was being held earlier today from the Steinspornbrücke onwards, hared by Lord Glo-Balls (OVH). Check out the Website for this global Event to get some more info. I can't comment much on the run since I have not been there but, judging from Hash Flash Fotos, fun was had by all.

I just learned that the Wolf, a friend of the Vindobona Hash and a main organizer of many Hash Travels and a main force with the Frankfurt H3 has passed away. Let's raise a glass to this Gentleman. I know I will. And try to remember him, in Langschlag in 2002 of course on the occasion of our 1000th as well as on many other occasions thereafter. I'm glad I could make his acquaintance.

Can't think of a more fitting song for all this, from the great Mark Knopfler. From the Dire Straits' first album in 1978.
On Out.

Posted by Marie Tamponette at 00:13 No comments:

Tickpleaser, a truly good soul and a well educated English Gentleman,  offered to help me set the first monday evening run in Perchtoldsdorf which seems like yesterday. That actually WAS yesterday and , though I had the intention to do the setting and all completely unplanned - call it spontaneous - Mr. Tickpleaser rode his bike a week ago and came down with a measured 4,2 km route that must have led more uphill than downhill, which is always good, and which took us just 50 minutes to lay the trail.

Since Richard Kopf still can't get his act together as RA the temperatures were again low and we had pouring rain and lovely wind. This did not prevent about 20 stalwarts to come along and, as usual, 20 minutes into this short run, running stopped more or less completely and a common Walk was had by all, back to the shelter of the terminus of Tramstation 60 in Rodaun and a funny circle that followed. 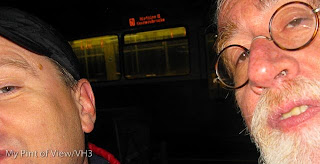 The OnIn was held in Perchtoldsdorf Hochstraße at a very pleasant place called Angelinis, a restaurant truly to be recommended. Good food and drink and very friendly service and the owner became our new best friend when he offered a free round of Schnaps to everyone.  Besides, Multiple Entry (crossposting from Moscow to New Delhi) and Beanman (still placed in Bagdad) came by, which improved the quality of the singing quite remarkably. 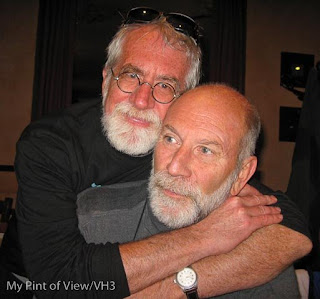 The Mystery of the Songstop shall be explained herewith:

Waiting for the Big One

Easter Monday is back and Slush Puppie and Ice Queen resurected the once popular location in Heiligenkreuz for a sort of rerun from the last time (was that last year or already two years ago?) without Mary Vetseras tomb this time, but lots of fresh Bärlauch and lots of rain and fresh air. 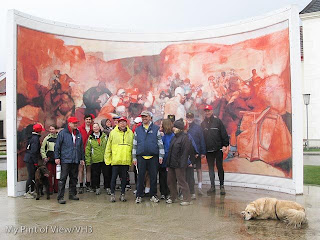 Easter Eggs were hidden at most checks but of course the real treasure box was that glorious bottle of egg liquor that was hidden at that raised stand for hunters and that quenched many a thirst. Sperminator and The Famous Pimpsqueak as well as the delectable Scarlett Pimpernell. Since there were no kids around this time there was all chance to grab those Easter Eggs by the whole lot, alas, I lost interest after the second check and apart from a chosen few who carried some eggs those must have been consumed during the run already.
The circle was a bit shortish as it was a bit nippy outside (I mentioned the rain and cold) and so it was left to the Restaurant inside the Stift Heiligenkreuz (and the occasional priest seeking shelter with the odd anonymous female at some corner table inside) to cheer everyone up and at least Richard Kopf confided to me that he hasn't seen Sex Energy "in such a joyful and talkative mood since 1962".
If that isn't something than I don't know what is! By the way, I am very happy to see Shiraz back and running with us.

is not just a song from the second album from my Ska Heroes The Specials, I am also trying to avoid them by simply making up a little storyline that could have happened at this run that was Hared by Squeeze Box Mama and Morning Glory in Arenberg Park in the 3rd district.

Is there any such thing like a Masters Masthead (like Munk has been preaching for years), consisting of the usual suspects who secretly decide about all the really important stuff for the VH3, such as er.... start of the Monday evening run season, nice hot beer for the circle in the summer and the eventual GMship honoris causa for Glo-Balls and/or Free Willie?
Was this a spectacular run, leaving up and down the Flaktower and once around the Arenbergpark and then all the way up these stairs straight up to Squeeze Box Mamas fridge that used to be loaded with lovely Coronitas ever so often?
One can only hope those Coronitas won't turn warm so drink them while they're there.
Run info? Circle Happening? Who knows?

On Out, in absence this time.

Posted by Marie Tamponette at 22:00 No comments:

Gaaden and its surroundings - though without too good a connection to public transport - are a nice place to go on a hike or, in our case, a run. Last time we went there - as far as I can remember must have been in 1999 with MEGATONS of snow all around.
This time featured a different weather forecast - slightly cloudy - and a different starting point which was the local cemetery, the end point to each and every Hash.
Very fitting to that I recommend to take a look and listen to the Chuck Wagon Gang if you're into Gospel Music. I know I am sometimes. Check this one out:

The trail was nicely leading around Gaaden and into the woods for a while, a little treat was a Chocolate St.Nicklaus for Slush Puppie and myself on the reason of our common 92nd birthday. I leave it to the esteemed reader to guess where there is an age difference.
It should also be noted that the Mautner Markhof family seems to own a huge part of the forest around Gaaden.
The highlight of the circle was a traditional Swedish Song and Dance performed by Uncle Bobbie No Balls Prize and visitor Big Tasty from Sweden.

This video has of course absolutely nothing to do with Gaaden, this run or Hashing. Tuff!

Posted by Marie Tamponette at 20:46 No comments: