Have yourself a Merry One

Well, what's all this stuff about global warming? I went out last Friday to a pub called Fiddlers Greenvirtually in the middle of nowhere, way behind Alland, Mayerling and Maria Raisenberg to see a show called Irish Christmas Festival provided by a Mr. Dietmar Hasslinger, I recommend to check out his site Weltenklang.
This promoter brings Irish Musicians to Ostrichland on a regular basis, I have been to many such a show in previous years and this time there was a trio called the Trad Lads, augmented by two Tap and Step Dancers, and a very fine quintet called Slide who played contemporary Irish Folk and if I may say so, these guys were clicking on all cylinders. Check them out if you like and if you're interested in this type of music.
Anyhow, driving home from the middle of nowhere was a pleasure of its own in -18 degrees in the darkest of all nights and I sure cound myself lucky that the car battery did not give in.

The consecutive Sunday we ventured out to set a wee and tiny little trail around Mödling at -12 degrees (yup, I just said -12).  Snow was all around, two drink stops were planned for and the tactic was to make it short and spend  more time dwinking the hot stuff. Well, some runners were late, some were very late, some started to panic over the phone (no names will be mentioned, it was just a Pain in the Ass) and in to time two groups of three Hashers each got lost (the entire Kunft family as well as the Moron Department with Mrs. Standing There).

I had to take care of ussy Schumi who lost briefly, then Richard Kopf and Rhymes with C* reappeared out of nowhere as she had just missed her flight to work somewhere over the great pond on some sort of huge vessel.
Got to the first drinkstop which was at a stall from a Christmas tree vendor from Styria who provided "Schnapstee" by his own defintion, well, at least the potion was warm.
Got to the second drinkstop which was the smaller of Mödlings two annual Christmas markets and still no sight of all the missing ones. No phonecalls were answered and fate had it that they all went back to the carpark already and missed out the better bit (which was less than 200 metres away from the cars).
After a short circle (still at - 12) those who were left went over to the intended OnIn which opened up its gates a few minutes after reservation time and so it was left to the last 8 standing to make it down the road to a very fine pizzeria.  My personal lesson learned is to use polenta next time. Hear those mobile phones ring I say!


Mele Kalikimaka to all of you.

And You and I

On a different note now. Great to see that Christmas is coming along in no time now. From what I could see from a message from My Pint of View the Santa Lucia run provided by No Balls Prize and Harry Tosser was funny and entertaining. At the same time, family and me went down to Eisenstadt to the local Christmas Market. Our very own personal and early Christmas present was that our Fallen Angel (3 year old daughter) made her dummy(pacifier) a present to a rather puzzled Christ Child (a young woman dressed all in white).
And, 11 days now there ain't no more dummy in our house. From what I keep hearing from very many parents all the dummy-, pram-, nappie and all other related stuff is just some sort of warm up. Wait till the kids reach their adolescence.
Been to Christmas markets far and wide, mind you that one so called "traditional one" in Prater near the Riesenrad is supposed to stay open until January 6. I'll certainly be there.

Well, the positive answer or musical recommendation is YES. What a beautiful Song.

Posted by Marie Tamponette at 09:47 No comments:

Grandpa got run over by a beertruck

Christmas is hiding away right behind that next Glühweinstand and it will be here before we all know it. The Martinsschlössl, venue of a few quite remarkable Christmas parties in previous years until changes of the mind made other venues for that social event more appealing for a couple of years (and those were changes of the map), well, a sort of homecoming occured last Monday (day before an Ostrich holiday) and 55 paying customers were counted on those premises.
The owner who goes by the name of Mr.Orasch has become a friend of ours over the years and since we were there last in 2006 he invested heavily in his sound-equipment as well as making the whole room soundproof. ("I chad no police visits for more than a year now, u know?").
Excitement was added by the fact that several acts had been prepared by different people and, ehem, Munk, Dr. Kunt and myself prepared for the infamous Flashdance again over the course of five rehearsals in our cellar and helped by copious quantities of red wine. Lday GoDiver, Squeeze Box Mama, Ice Queen and Pocahontits performed a spectacular mini dramolette and Unlce Disco Bobby No Balls Prize was the guitar hero of the evening. My Pint of View sort of held the whole thing together as the human clamp with his so-called "Porn Flics" of different forms of Hash Behaviours during the past year.
Watching all the different performaces (and Munks usual speech for the golden beer can awards) was fun. It remains to be seen which kinds of attractions (Siegfried and Roys silver tigers=) can be presented next year.
On that note, we left the Martinsschlössl well after midnight and I am delighted to Lord Glo-Balls (OVH) already booked the place again for December 11 in 2010. Which is a Saturday for informations sake to all of you out-of-towners. Make your travel arrangements in time since there is no excuse for all of you to not come. To the party.
Thanks for a very harmonious evening altogther, I certainly enjoyed myself and had an enjoyable chat with Mr. Smelly Cheese himself.

Until the uploading of the Christmas Party videos by the legendary My Pint of View (do I just raise my beer glass to you or vot?) you will have to do with one flic that features Richard Kopf at the Great whine Weekend last April down in Styria.

Posted by Marie Tamponette at 09:30 No comments:

A quick line from sunny Cairo.

All I can say is - if you like this mans blog - then I strongly urge you to view him doing his best...

On On Marie T - what a guiding light you are to us all!

Posted by Marathon Man at 16:40 No comments:

Yours is no Disgrace

Good old Moosehead. The tradition of the glorious Punschrun that holds many a fond memory has been ressurected by Mr. M.himself and with the help of Tickpleaser and Mind the Gap the whole thing rightfully became a walkers heaven for drunks. Meaning, I - from my elevated position at the rear end of the pack assembled with the legendary Lord Glo-Balls (OVH) . saw two or three people running. Out of a pack of 25 that is. The happy rest just chit chatted the afternoon away with a gentle walk, happily sipping their placticcups filled with Punsch and/or Glühwein.
The three features were not just see no evil, speak no evil, hear no evil ...

but also three nice Drunkstops, the last one with a spectacuar view over foggy Vienna from the Schloss Wilhelminenberg.
The circle was held outside the OnIn, good old Predigtstuhl, venue of many Hangover in the making.
If one would compare the shape that this pathetic former running group was say 10 years ago to what it looks now, the solution would be to just set trails that lead from one Heurigen to the next.
Mind you that the local Hash Christmas Party was on last night, with a new version of this spectacle from way back: 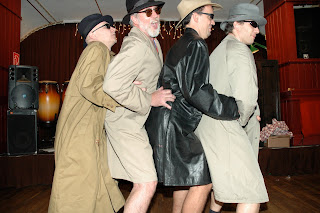 More on that in the next blog entry. Stay tuned. And, all credit for the Hashpics goes to My Pint of View (of course!).

All the World's a Stage we pass through

MOM. Just three simple letters should be sufficient to ring a massive bell to all local Hashers, added by the fact that Seibersdorf marked his workplace for the last oh so many years. After a typical specific description on how to get to the middle of nowhere, a surprising many 35 or so assembled to give MOM a suitable sendoff into his pending retirement.
Since their was another large crowd of hunters armend with pretty impressive shotguns guarding another forest just down the road form the Research Center (remember last weeks new friendship to another pack of foresters), and please add a gloomy comment by our beloved Grand Meister:" Err, King Ralph isn't here to bail us out this time!" it was with a bit of baited breath that we started to run in the direction where the shots could be heard from.
With much relief it can be stated that after two or three checks and the remote sight of yet another forest ranger vehicle the BEER STOP came in sight and I heard nearly no-one complain about the fact that the beer was not cooled down properly. Lots of chips added to the pleasure.
Short and sweet story afterwards with a run alongside the Research Centers Fencing and towards the end there was a special treat for the frontrunning Bimbos and Wankers (Sex Energy being the Front running Bimbo of ce jour) of tasty Kolatschen and please do check out the pic to see what I was and am referring to.
Nice circle with a beauiful sunset in November (hey, thanks to eternal Springtime!) and it is on out to my recommendation of film this time which is the following, one of the best films made ever, as far as I am concerned:


Dr. Strangelove, Or: How I Learned To Stop Worrying And Love The Bomb (1964)

Posted by Marie Tamponette at 00:07 2 comments: