So it was Wiener Neudorf revisited, this time by Sex Energy and Casting Couch on January the 30th. The meetingpoint at the local Music School (the Christoph Migazzi Haus) caused a little confusion amongst attendes on where to park their vehicles but as soon as the run started everybody seemed to be there.

Though situated really close to a main motorway there is a smallish beauty to the place namely a small little rest of a forest alongside the Mödlingbach. This way we took on loads of snow and ice and at main checkpoint it was on off into the distance all the way to Laxenburg, home of the IIASA and workplace of quite a few, past and present Hashers. A gentle walkers trail was being offered there which only the usual suspects took (no names shall be mentioned, just the local powers that be) and for the rest it was a bit further on into the fields along the railway (it was a first for me to see a VERY old-shaped Laxenburg railway station) and after a while there was a loop leading back to the far end of Biedermannsdorf where, at one point, we had a Sturmstop many years ago.  Minuteman, where are you when you are needed? Please come back, all is forgiven.

The last part was quite a casual jog back onto the main road on over the bridge across the Südautobahn where Munk and Tickpleaser unsucessfully tried to block me off from overtaking them. Well, at least Tickpleaser motive was worthy as he had done 25 kms on that morning for training purposes for this years Vienna Marathon.

On back at the carpark Sex Energy and little Fallen Angel joined the fold, the circle was shortened considerably due to the temperature and even the local law enforcement officers were mild on us when I pushed my innocent little kid in front of them. The On In afterwards (a sort of supersized Chinese/Japanese Establishment), albeit only being opened last year in November, must really have seen better times for the service was sloppy and the free unlimited drinks weren't on offer anymore. Boo for that.

Nice run though. On out. 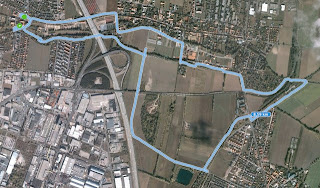 Am I fixated on Fusion Music or what? What a beautiful song. Gayle Moran does the vocals. Look for the Cee Dee.

Posted by Marie Tamponette at 21:36 No comments:

R.I.P. Gary Moore and thank you. It all comes down to good music.


On out.
Posted by Marie Tamponette at 13:57 No comments:

Stockerau was the place again for the run on Sunday, Jan. 23, the Hares being SuperMOM and Root CAnal. Apparently a two hour long exercise out in the lingering cold. At least there were no mossies around like last year in July when they were all over the place then. Not very much that I can say  about this run since I was not present. This is where family and I went instead.

On Out.
Posted by Marie Tamponette at 21:22 No comments:

Let's have a bit of music

Unlike very many of my contemporaries I have never set foot on African soil. Just to point out the beauty and inspiration that - for instance - Egyptian Music had on two regarded Gentlemen (It's an old chestnut I know but still darn pretty):

Going down south a bit further, have a look at these two (Stewart Copeland and Ray Lema):

And obviously, not to underestimate the influence of African Beer on mankind.
Posted by Marie Tamponette at 21:04 No comments: