For the annual best Christmas run in 2015 it was On On to Mödling Train Station carpark, an old but not so often used favourite. Somehow the directions to the carpark were leading to one place and those for the public transport users to another which happened to mislead a special few (Sorry Mr. Pink!).

Se* Energy who developed into the principle force during setting this run and yours truly tried to come up with some yet uncovered terrain, namely crossing through the Museumspark in Mödling, place of a glorious Winefest every year in Summer, and after being forced to wait at closed traintrack bareers looping around most of Sankt Gabriel cloister and eventually a maze-like trail trough the better park of the settlement of bungalows in Südstadt. The first drinkstop follow soon thereafter at our local Billa Supermarket where the vendor of our annual Christmas tree welcomed all with a pot of way too much sugared tea with some spice (Schnaps).

Holiday Returnees of the day were Sheila showitall and Gawd Almighty Cute with their two kids. The two firstmentioned ran with the VH3 from 1996 - 1999 and after a 30 hour flight apparently  they first dumped their luggage in a hotel room and secondly came straight to the run.

The second drinkstop at a Christmas Market at Mödlings Waisenhauskirche featured some real Glühwein and this is where I saw Mr. Pnk catching up. The way back to the carpark led through the train station underpass. A special treat during the circle was some home made Christmas Cake courtesy of Casting Couch and TwoBob and a huge packet of Schwedenbomben which disappaered within 3 minutes.

Suitable for a Christmas run writeup I would like to wish all of you out there a Perry Sherry Christmas, especially the VH3 alumni all over the world; be they in Tennessee or elsewhere in the USA, Canada, Australia and Tasmania, England, Switzerland, Abu Dhabi or elsewhere. None of you are forgotten.

Happy Holidays all, listen to this great Song by Klark Kent


Posted by Marie Tamponette at 23:59 No comments:

Mood for a Day

And what a day that was, the second advents Sunday, with the run being Hared by Squeeze Box Mama and just Michael (?) starting off from the Arenbergpark in the 3rd district. A few hungover faces I could make out at the start and HANG ON I thought that Likk'mmm was supposed to be somewhere in Switzerland? 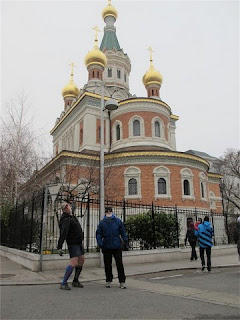 During the course of a casual and relaxed run where Ice Queen nearly bombarded the pack by intending to throw down beercans from her balcony a first Highpoint was a short stop near the Russian orthodox churchbuilding in the 3rd district and a second and most popular Highpoint certainly was a Gühwein Stop at the Belvedere Schloßpark Christmas Market. 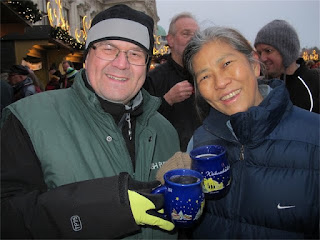 But that was not all, folks! Some - many - of us cleverly shortcutted their way back to the end of the run, thereby completely missing the well-intended SECOND Glühwein Stop inside SBM's appartment. I took a few telephone calls to get everybody up to the realm of the huge kettle that must have contained several litres of that beverage.


In the end, circle in the darkness and a not so well meaning local lady who must habe lived nearby basically told us to get lost after 20 minutes. Albeit, no police this time.

Posted by Marie Tamponette at 12:06 No comments:

So on the last Friday evening in November Se* Energy and I decicded to set a Full Moon out in the sticks where we reside which is below the southern confines of Vienna. The run was a casual affair where setting took no longer than half an hour. The emphasis though was not on runnng but much more so on beertasting when our local new microbrewery was about to open its gates. All said and done it was interesting to see that owner and Brewmeister Just Helmut still needed much too long a timeperiod to pour all those pints for us.

As of today the place has officially opened and a Hash beer tasting evening has been tentatively booked for late January.

Posted by Marie Tamponette at 11:54 No comments:

On a frigging cold afternoon the meeting place was set right next to M;y PInt of Views living room which ist the Auer Welsbach Park in the 15th district. Anita Hanjob and Eg Al themed that run with "Conchita Wurst" (Who?) and MOM, truest of all impersonators showed up with an impressive presentation that would have been worth all Eurovision Song Contests Past and Present. Trail had been set with couloured chalk and very quickly I found myself running together with MPOV, The Blessed Saint Normen and Deodorant when we more or less unsuccesfully tried to follow what as a long loop all around the Schönbrunner Schlosspark.

After somehow getting up to the top of Maxingstraße somehow it was On On to a Stop without Drinks (at least everyone stood and waited for something that never happened or materialized) and further on into the Schlosspark via the upper end of Schönbrunn Zoo and past the Gloriette. On Back into the Park and onto a freezing cold circle.

Posted by Marie Tamponette at 11:42 No comments:

Let's start off with the real important note first: Eurohash registration has opened On November the 18th evening and I have regisitered already. You should do so too.

The run I am trying to remember here took place in the Lobau, near the Ölhafen where there is a vast vast area of forests, meadows and ponds (Lacken). New Vice GM Lopsided Backside and Just Michael have set a long one, leading past the Panozzalacke and deep into that National Park terrain. Evenutally the trail was split into a walkers and runners trail, the announced drink stop consisted of some Baileys-like Irish Cream that had to be drunk from the bottletop and at long last it was on back to the carpark.

After some heavy run on the way to the run the skies cleared up magically during the circle (even if that ended in pitch darkness and happy faces were seen all around.

No pics were made during this run so instead I will come with some facts about swimming in the past, historically seen.

Posted by Marie Tamponette at 11:32 No comments: