Bobby Pickett and his Crypt Kickers will sing a song at the end of this post, as Halloween is approaching fast, accompanied by the odd photograph.


Posted by Marie Tamponette at 15:52 No comments:

Some Assembly is required

Vienna not only is very well known for the vast amount of vineyard areas within its city limits (read more about it here),  there are also plenty of green areas to make the weekly runs of the World's Worst interesting and diversified.


Located a bit on the Eastern edge of Vienna, the vast area of the Lobau, which forms part of the Nationalpark Donau-Auen, a forest  a considerable size allows to set runs year in and year out. The fact that the place neighboured by a Gasthaus is a welcomed fact.


The parking lot near that Nationalpark house was cracking full on a warm and sunny days (its only the second half of October and Indian Summer time) so it was left to improvisation to find a place to park your vehicle. A crowd of 30 made it out there and, after Hash Cash was collected and "chalk" talk was completed (which was the Hare Lopsided Backside drawing symbols into the sand with her right shoe, no chalk was harmed) she and her sidekick Hare Just In Beaver commenced which was a walkers and a runners route. This map gives you an idea about the whole area, look for the "Nationalparkhaus Wien-Lobau" on the left, this is were the run started.

As usual during runs in the Lobau I admire the piece, nature, variety and everything and - same procedure - I get hopelessly lost and am wondering how one can find her/his way in this beautiful surroundings, when everything starts to look the same after half an hour, meadows, forests and waterways? An intented drink stop was reached and left before the drinking supplies arrived that were carried by the walkers Hare Lopsided B. A bit of a muddy crossing came up and, after much more walking and running it was on back to the starting point for drinks and circle.


The circle featured Casting Couch's certificate for completing 850 runs (OVHdom is around the corner), new boot Maja from Kuala Lumpur, the last of another visit by Glory Daze all the way from the US and a double naming ceremony for Just Julia and Just Susanne who got their Hash names Injection Pump and Not Yet, for various reasons. My congrats to the happy recipients! And, yummy Irish Cream liquor was served.


Moron pics will be linked when they become available.

Posted by Marie Tamponette at 15:44 No comments:

The Aesthetic of Simplicity

Odds and Sods as of lately.


Posted by Marie Tamponette at 14:04 No comments:

Mr. Pink, A.N.A.L. and Barefoot were the Hares at a location that I least I haven't to in years. At the beginning of a popular local walking route in the middle of the vineyards of Viennas 19th district - in not too bead weather - it was on off downhill, across the Agnesgasse and then On On, passing by various posh houses, the American School of Vienna and after that on into the forest and steep uphill, following signs for the Höhenstraße and the Häuserl am Roan, not too for from our very own Grüß Di A Gott Wirt (place of VH3 run number 1).


Shortly before reaching the Höhenstrasse, a wine stop was called for and, surprise!, no local wine was being  offered, but stuff from California (or so I understood). After an extended drink-and-taste stop it was on further alongside the Höhenstrasse for a bit until the next Gasthaus, the Häuserl am Stoan, came up and it was all downhill from there. Lots of happy looking costumers in the garden of that establishment was a clear indication that of course there are several worthy food places along and near the Höhenstrasse.


On down and back along the steep and traditional looking Dreimarksteingasse, finding the way back thru the Vineyards and on to the carpark was easy. The circle featured Grolsch Beer in bottles (well done Hares!), wine, crisps and certificates for Boney M. and Joystick who have reached some significant run numbers.

Moron Pics can be watched here.

Posted by Marie Tamponette at 22:05 No comments:

If you really are a dedicated human being with not much life other than Hashing, well then it is not too hard to do each and every run in and out of season. A special run that I'd have liked to take part in (obviously I don't belong to the aforementioned elite group ;-) was the three country run, organised by No Balls Prize, Tickpleaser and Prof. DDr. Felch, OVH, some 80 kilometres away from Vindobona. Three country run? Being located in a corner right next to Slovakia and Hungary, also the most eastern point of Austria, this seemed to be a rightful place to set a run, with old-fashioned border controls and all.

Look for your yourselves, here are the Moron plcs. 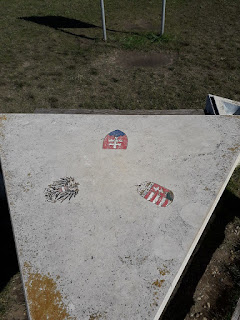 Posted by Marie Tamponette at 21:23 No comments: