Today a year ago I started this Hashblog, the idea was to get rid of the old Rehashes that once covered the runs of the Vindobona Hash House Harriers and to find a new format, mix things up a bit. Thank you very much to all who visited and indeed thanks to all those who left comments. Even if you don't have a clue what Hashing is all about and just jumped onto some musical piece, well I would say we also share a common interest here.
Enough sentimentality, the aim is to get ready for the Schweizerhaus closing day this coming Sunday.
It is all about beer, music and nice company. By means of explanation in case you have never heard of this great beer place.

Home by the Sea

Another run I couldn't make, and alas I read about Schnaps -and Beerstops that I missed in the rain, somewhere out there at the Badeteich in Süssenbrunn on the other side of town, hared by Needleman and Bootleg Sister. Cold and Rainy but still a turnout of 18. And the OnIn at a Gasthaus by the Lakeside. OnOn to the next upcoming distractions. 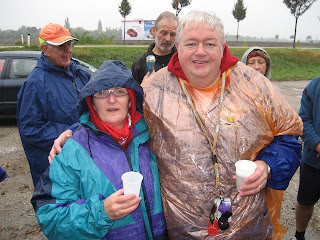 On Out.
Posted by Marie Tamponette at 00:56 No comments: 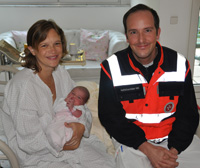 Are we talking about potential members of our Masthead in 20 years time?
Here's to somebodys little sister:

On Out.
Posted by Marie Tamponette at 00:25 No comments:

Labels: Future of the Hash

I wonder as I wander

Before I try to cover that insignificant run from Sunday the 10th of October, sincere congrats herewith to Pussy Galore and Just Maria on the occasion of the birth of their son Matthias Bernhard  on Saturday October the 9th. Keep building to the Hashes future, folks! We know who'll be next here in Vienna. Watch this space.

Admiring a vast area of fields and half finished houses - and the newly opened terminal station of Viennas Metroline # 2 (U2) one could not help but feel immediately at home, in the midst of half-finished houses, long roads of England-like semi-detached houses and - Transdanubian special - completely flat area. Aspern, one of the oldest settling areas of Vienna and for sure the scenery of Naopeleons defeat in 1809 - will be seeing a whole new part of town coming to life in a few years, including a further three of four extra Metroline stops.
Anyway. Some unexpected a very nice green parts including some quiet backroads led out to the former Flugfeld Aspern. Flat terrain as flat as possible all around. The only elevation I could make out was a three metre high mudhill where there was the songstop.

After that it was another long and straight run to the Marathon Man Family house and a very welcomed Schnaps stop. And then on back to the car park where credit was due once again to Marathon Man for doing a fine job as guest RA, in the absence of most officials, except for one (the most important one of course).

Those building site containers at the parking lot even contained a halfway decent and open toilet with toiletpaper, pretty astounding for a Sunday afternoon. Senk ju to the Hares My PInt of View and Joystick of course.

This song is herewith dedicated to Mathias Bernhard, baby boy of Pussy Galore and Just Maria.

Posted by Marie Tamponette at 23:28 No comments:

Literally spoken since the place that the Hares Deodorant and Knödel mit Ei had chosen once was a large factory to produce TNT and one place that saw some forceful detonations. Writing this run up in absentia I can only speculate about the happenings, furthermore no Hash Flash was present so you will have to do with this or writeup or just be so kind as to leave a comment if you made the run. Derelict houses, tunnels, old railway lines must have provided a special feel for the attendees. Remember that the nearby Tattendorf winemakers who are renowned to produce a fine Sankt Laurent.
Well, that's about it.


Posted by Marie Tamponette at 22:19 No comments: