Langenlois, a town somewhere in Lower Austria and 70 k away from Vienna, well known for its fine wines (examples here and there) was again the venue of a run set by Lopsided Backside, duly supported by No Balls Prize. Yet another 35 or so Hashers came by car, train and even walked the last bit to the train station (Mother Superior and Cardinal Munk, both OVH) as the driver (MOM) must have parked his car quite a bit away from the carpark. Nothing new weatherwise, it was yet another really warm day and after the start, when the trail split into a walkers and a runners trail, the common way uphill caused not massive sweat for everyone, and a certain member of the OVH took advantage of the great views that these hills were offering:-

After that much welcomed breathing stop it was downhill sooner than expected - there was a winestop promised at the start of the run - and both walkers and runners found their way back into the confines of Langenlois, a well kept city with lots of winemakers and a big number of old looking buildings.

And of course a very special hotel for the romantic winos, to be recommended. Seemingly aimless trail kept getting us nearer towards the drinkstop. 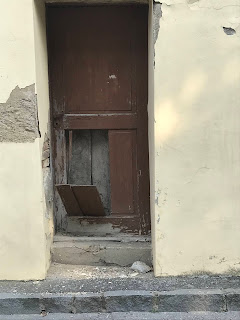 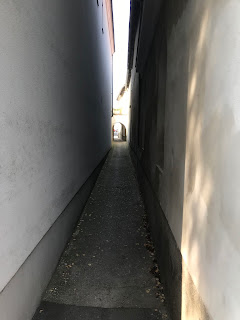 The winestop eventually materialized in form of a Wine Stall of the local Kellerfest at the Sauberg (charming name) and those glasses of Weißer Spritzer (White Wine mixed with mineral water) went down everyones throats in no time. Apart from those who had non-alcoholic drinks of course. Lopsided Backsides Mom (not the Hasher of the same name) helped to operate that Wine Stall and apparently knew most of the pack as she seemed happy to see us.

After the wine stop it was on back to the carpark, with a long circle, lots of cool beers and a visitor  from the Bay of Islands Hash in New Zealand (friend of Free Willie). Apologies for not memorizing his name.

A very fine effort indeed, Langenlois is well worth of trip for Hashing and bacchantic pleasures.

Posted by Marie Tamponette at 22:27 No comments:

Posted by Marie Tamponette at 11:26 No comments:

With a mighty crash

The Blessed Saint Norman, OVH decided to lay a trail in Gerasdorf bei Wien, another place on the other side of town. After an extended period of heat the clouds finally started to turn black and dark and even darker. Big renovation works/road works were on at the carpark of the trainstation in Gerasdorf; after Hash Cash Ass Prof. DDr. Felch, OVH collected Hash Cash it all came together and the rain exploded with a mighty crash.

Of course, most of the pack of 20 were far away enuff from their cars to get soaking wet in no time. Honestly, I liked that mighty downpour very much that also delayed the start of the run for a quarter of an hour. After the rain had ceased those who could hide in their cars in time (Moron Bros. Inc. for example) got out, and a train arrived that allowed the latecummers Mr. Pink, A.N.A.L. to join in time and off we went onto a trail where the flour got more or less washed away completely. The good Hare made up for this by remarking the trail with chalk during the run, which worked quite well.


Running through various very wet parts of this and neighbouring villages, passing by a Salami factory (I don't like Salami) and all the way on, passing a flooded railway passage (where Finger Me had the audacity to take off her shoes to keep them dry) a car junkyard, which was followed by extended stables, a dog exhibition centre and finally the local Badeteich, it was on back to the train station after one and a half hours. The circle featured Finger Me as Richard Kopf lookalike (in the absence of the latter) to thank the RA for his incompetent weather management. Other noteworthy Down Downs were handed out to Just In Beaver (cycling 82 km before the run) and Daisy Balls (starring in a theater piece which is on for the next three weeks). 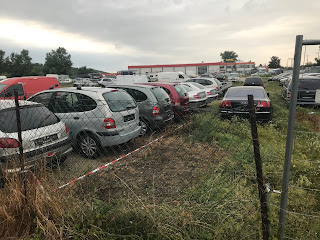 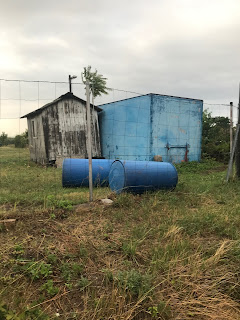 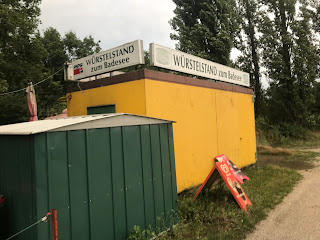 Moron Pics to be seen here.


Posted by Marie Tamponette at 11:23 No comments:

Warm summer evening, nice crowd of 30. You have heard this before and the run that Victoria's Secret came up with last Monday somewhere in the 21st district of Vienna was no exception. Partly doing a rerun of a track she set together with Lopsided Backside, or was it Nail Me?, the surroundings were still mostly unbeknownst to me - as an Ostrich living on the other side of town - up until the manifestation of the Großfeldsiedlung with its plethora of appartment blocks came up, and that was after a good bit of running was done already. The pack separated into a (bigger) runners and a therefore smaller walkers group, only to merrily reunite of the beerstop with lots and lots of COLD BEER.

After the beerstop, it was again runners and walkers trail leading back to the circle that had a returnee of the special kind. Whoppa made his return and was welcomed back into the fold with the evenings first Down Down. Hashflash My Pint of View did 700 runs and was awarded a certificate, again LOTS of COLD BEER were available and the circle stopped when it was declared that the kitchen of the OnAfter (which S.Energy and I did not to go) would close within the next twenty minutes.
A fine effort by the Hare, many thanks.

Moron pics can be watched here.

Posted by Marie Tamponette at 20:58 No comments: