The Palace of Exile

can be found near Baden, in direction of Helenental. Park your vehicle next to the Hotel Sacher (not the one in Vienna) and then get started on over to forest, eventually finding your way up to the Ruine Rauheneck. Sperminator and Little Richard started the tradition of the Kaiserjäger a year ago and the second edition was placed on the outskirts of Baden. Knowing the prowess of the Hares, 25 or so runners showed up and then it was on up the hills. A few lenghty checkbacks later that aforementioned Burg Rauheneck had been reached. Look for the airy-fairy backside of Richard Kopf's Kopf.


The way back saw a songstop (well-meant effort) and some wading through lots of underwood and leaves on the way back to the carpark. Praise go to the winning initiative of the day which was to bring along 4 doublelitres of Sturm (all those readers from abroad see here for a description) and Little Richard tried to top that by having Linzer Torten spendiert (Hashy Birthday!) and the icing on the cake were the tastefully designed free Tee-Shirts by the Hares, let alone the Stamperln (Schnapsglasses) with the old double-headed eagle (once a symbol of Imperial Austria).
Farewell herewith to Crag Rat and Minnie Mouse, who should be already back in Nairobi. Godspeed!


Round this windy affair up with Pink Floyd:


On Out.
Posted by Marie Tamponette at 22:23 No comments:

One Fish, Why Not

The first Sunday run was set by the remarkable Standing There in the vicinity of the Museumsquartier near the centre of town. For several reasong I couldn't turn up, from what I heard and read there were a few sights alongside the track and lots of lovely food, Champagne (Farewell to Glory Daze!) and Cold Beer. And Richard Kopfs sister made a visit. And even more food at the On In. For a special prcie of course.


A musical blast from the past, somehow.


On Out.
Posted by Marie Tamponette at 00:10 No comments:

This gem has been pointed out to me by a well-meaning bloke and maybe at one song-stop on a future run the Song will go something like this.

It is called Siberian throat singing.

he loved the rain

she came into his life

and gave him an umbrella

(Russian Haiku)
Posted by Marie Tamponette at 23:52 No comments:

Labels: Not what you're expecting

A new or much rather a different location (a carpark 200 metres away from two previously used starting points) was more than enuff to attract a crowd of 20 out to Strebersdorf and the usual routine occured. Meaning that we hit the vineyards and the Kellergassen once again (and all those sure are beautiful surroundings) and, after walkers and runners trails split and merged again, met at the Heurigen zur Christl at the Senderstraße in Stammersdorf, where we had many a drinkstop on previous occasions. "Don't you worry guys, this run will be short!" sayeth the Grand Meister. And that meant of course that the trail, for the runners at least, meant sweating and puffing and cursing. Though all was mended at latest at the winestop.

And, after a not so long way back to the carpark the once again cool beer and the present of King Ralph's presence completed this last Monday run in 2010.

This music has got absolutely nothing to do with this run or the area of Strebersdorf and comes from a guy whose music I love a lot.
Check out Vinicio Capossela. This one is from LiveinVolvo.
Brush up that Italian of yours.

On Out.
Posted by Marie Tamponette at 23:36 No comments:

The delectable Finger Me, being duly assisted by My Pint of View and his Master Circle Jerk chose the venue of the Hash Houuse (Gösser Bierinsel in the Prater that is) for Finger Me's virgin Hare run. Since there is not much that one could possibly do wrong in this area, it was a treat to see that unkown terrain had been covered even after all those years and I found it especially pleasant that the first part of that run was being set on a relatively small area. After crossing the main road near the Lusthaus, it was more a standard thing to get to the Prater Hauptallee and then back through lots and lots of mud and dung.
The pleasure was all ours when a tasty cake was presented and Bier Her, our famours waiter from the Hash House enjoyed a few Down Downs with us. If you ever can fit that trip into your calender, go down to the Gösser Bierinsel and enjoy the great food and the peoples friendlyness.
The menu - Fleischknödel mit Sauerkraut - was simply superb. 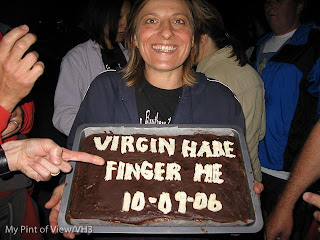 Hashing Life is a piece of cake? 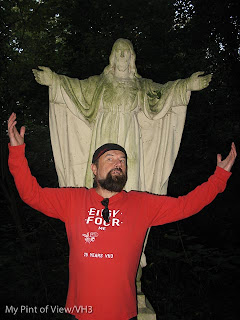 And put this to a worthy ending with a theme for something really important:

The Wasserpark right next to the Floridsdorfer Brücke is a stonethrow away from the now well-known carpark 300 metres to the southeast on the Donauinsel so a suitable question could be asked - why set runs very often in the same evnironment? On the other hand, that is not overly important as long as there is cold beer available and it does not rain too hard during runs. Although, Hash runs in torrential rain can be very funny. There are lots of fond memories, also a few from the current Hashing year.
Anyhow, this run was an after rain affair and it was well done and there was a beer stop, featuring COLD BEER. Very appealing indeed. Yet, at the beer stop location alongside the Obere Alte Donau the Hares declared that they either ran out of flower or something must have happened as 95 percent of the runners present decided to take it easy and just walk back.
A laid back circle later when daylight disappeared rapidly it was on off to a traditional Gasthaus nearby.

On Out.
Posted by Marie Tamponette at 23:19 No comments:

Farewell at the Summer Office

The summer office, located at the Rathauspark in Viennas first district and opened annually during July and August is the place for the likeminded to spend the occasional and relaxed lunchbreak at. Over the years a loyal group of followers developed, and the comings and goings over the years now led to say goodbye to Lady Go Diver, who now works in the Pays Bas but promised to make it back occasionally. As you can tell by the pic, a small but merry group enjoyed that day. Farewell to Lady Go Diver and very best of luck to you!
Especially for all those who came to Vienna and left again, here is my personal musical wish to you. And try to find out who plays the saxophone at the very end of this song, you'll be surprised.

On Out.
Posted by Marie Tamponette at 22:49 No comments: