Set your Heart at Rest

Before I start to scribble about this one, here are two pics that relate back to the previous post:


At the hilltop on Bisambergs Senderstrasse there is a spacious carpark, suitable for a much bigger Hashcrowd than there was present on this evening (and I am talking about 35 people already). This very carpark was the site where, in the OLD days of the World's Worst, when we even had a Hashit Trophy to be given out weekly, and that very trophy which was toilet seat, was to be run over by the car of Richard Kopf Morehair (OVH) and all this happened in the presence of Smelly Cheese, another living legend of this Hash.

OUT OF NOWHERE did Smelly Cheese he reappear after too many years of AWOL and, even more remarkable, his son JJ, who was named SACRED COW some 20 years ago, also came out of his hiding, for the very first time since he received his Hash Name. Hares RootCAnal and Free Wily were giving lenghty explanations for what proved to be a very lentghty run. Running down the Senderstrasse again and off into the vineyards, followed by the end of Stammersdorf and continually further away from the carpark meant heat, dust and frustration as there was no sign of a beer- or winestop along the trail. A small drinking fountain was not enough to chase away the unreal memories from Free Willy run classics such as No Sarz on Mars in 2003, when after two hours of running, he declaimed to the pack of 60 "Well, the good news is, that the longer part of the run is behind us, it is only one more hour to go.  The bad news is that I've just got one water bottle for me and all 60 of you!"

A further long loop around the far side of Bisamberg later and it was On In to the carpark again, followed by a nearby On After at a really nice Heurigen. Pics of this run to be seen here.

Posted by Marie Tamponette at 22:39 No comments:

The old friends that is. Meaning all those who preregisters to Cardinal Munks birthday run (soixant-dixieme) on another hot and sunny day a few weeks ago, way out west over there in Eichgraben.  How many where there? It must have been well over thirty freeloaders, as the Hare (duly assisted by CoHare Joystick) invited us all to wine and dine after the run (of course with copious quantities of cold beer available).

There was a food truck arriving shortly before the run start, there were fridges with stacks of beer, tables with white table-cloth were set up and off we went, the pre-run explanations were given (walkers and runners trail) and then it was off into the woods, at some point quite close to the railway tracks of the Westbahnstrecke, at another point it was deep into the forest and, on the upper end, the Hares desperately tried not to raise the tempers of a local farmers family who were cutting wood (that only worked in parts) and, eventually, passing by another farm (with no-one in sight this time) just a few piggies oinked their salute for the thirsty runners. 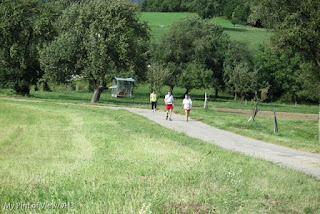 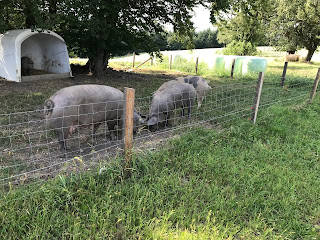 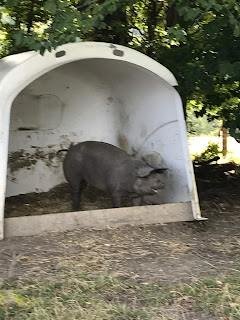 What followed was the beer and liquor-stop, with some tasty stuff (whisky or the like) being provided by a friendly neighbour of our Cardinal. I had not the biggest intention to run, yet still tried to folow the runners which resulted in me getting way behind everybody else. What the heck I thought, there was still Mother Superior, OVH and Just Asako in sight. Towards the later part of the run there was a village called Knagg (which 37 inhabitants, according to this source). There was no infrastructure in form of (even smallish) shops but most astounding haciendas. Very subtle and sophisticated, but hardly reachable via public transport.

Getting back to the Cardinals residence (the Castel Gandolfo of the World's Worst so to say), the scene was all set for a great party. Likkmm came over from Switzerland and presented Mr. Birthday Boy with one of his old running shoes which he wore from run # who? to run # really cares?. Ice Queen and Slush Puppie provided a barrel of Salm Bräu Beer ...


... and a special reappearance of Marathon Man, who together with family moved back to Vienna was feasted, together with newly wed couple Mr. and Mrs. Pink (congratulations from my side as well!). Pics of this run can be seen here.


After the circle, tasty food and drinking until late. Very well done indeed!
Posted by Marie Tamponette at 22:03 No comments:

Breaking up the string of regular Run Reports and such here is a short story about a Female-only run event that happened earlier today in Vienna at the Harness Racing track in the Krieau which is part of the Prater area (with our very own Hash House only a couple of kilometres away).

10 brave and merry Harriettes of the World's Worst teamed up for a 5 k event which was called the Muddy Angel Run (a charity run for Breast Cancer help and without timing), and at the allotted starting time of 10:40 AM an even merrier bunch of 6 Gents (+daughter Fallen Angel and pooch Just Melios) who served as Chaperones carried all the runners belongings, quite a few bottles of Prosecco and, in my case, a cooler full of beer, to the venue to watch the fun unfold.

The running track was marked with pink tape and looked a little complicated to follow for the bystanders, therefore seeing our group of Harriettes at all the obstacles during the run was not possible. Nevertheless the excitement for the spectators was to witness the team spirit that was displayed, as they all waited for each other at the waterpool, the mudcrawl, the bubblefoam bath etc. and the finish line was crossed by all together. My sincere congratulations to all Harriettes who took part in this charity run, after changing and showering (cold of course) a little picnic with Prosecco and beer was had. We also met MOM after the run (out to watch his daughers run) and Molotovs Vagina, now a mother of two boys.

A truly great and inspiring occasion. Fun was indeed had by all. Prof. DDr. Felch, OVH and myself took plenty of pics and we will forward these in due course to the Moron Brothers to put them up on the Hash Photosite. Pics of this remarkable event can now be watched here and there.
And now on to the visual proof of my gibberish :-

The string of the (Quote Hash Lash) "traditional runs" also includes our (S.Energy and my) run of the local Figurteich in Guntramsdorf (scroll down the Link to see the description), a swimming place I went to for 35 years now. Another scorching hot day gave me the envious task of setting the fastest possible way to the sumptuous Weinfest in Mödling which is yet another annual event. Age and the heat were taking their respective toll and hence it took quite a while for the walkers (most prominently Lord Glo-Balls, OVH) to get to Museumspark in Mödling, venue of the Weinfest to sponsor an already eagerly awaited round of refreshments.

The way back to the carpark was featured by CoHare S.Energy watering the sweating runners with our gardenhose when they were passing by our house. Before the circle started near the Figurteich some well-deserved swimming was carried out and the On After - at long last - was moved to a nearby Heurigen, the Hares favourite one I hasten to add.

For pics of this run please look here. 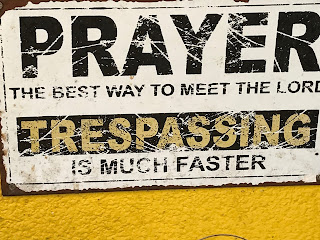 Posted by Marie Tamponette at 21:52 No comments:

Ain't too proud to beg

This is the year of birthyear runs and other commemorative dates, such as 1966..., er World Cup Win for England etc. But I won't go into that, just a brief mention about the Ostrich soccer team taking a win in Wembley in my birthyear. And the man who scored two goals in that game went on to become a great kicker in the NFL in the 1970s.

Apart from these brief memories, the main aim - as always - was a free swim and a grill evening after the run. Regular Hare Tickpleaser was ably assisted by Hot Property "You know, HO helped me to set this run, of all the runs I've set up here this is the best trail" (Quote-Unquote Tickpleaser). There was no denying in enjoying a scenic run all around the Gießhübl area, starting off from the local vineyards via the nearby stone quarry, on up to the Kuhheide, a long and muddy way downhill through the forest which looped back towards and underneath a motorway bridge (A21) and back all the way to the palace of Tickpleasers. Pics of this run can be viewed here. And we are not too proud to beg to be allowed back next year.

As always, swimming and grilling ensuing.


Posted by Marie Tamponette at 21:31 No comments: