Maybe a bit of a contradictory title for this post since I intend to end it on a high note but who really cares about this? On very short notice Sex Energy and I could persuade our daughter Fallen Angel to both stay at home instead of taking on a 49 kilometre drive to Stockerau, the area the Grand Meister himself and his wife did choose for a run in the heat in those forests (Auwälder) with several billions of every insect tribe you could imagine waiting out there to eat you alive.
Just about 20 brave ones did not care about the temperatures, the run featured a walkers trail even, yet that did not seem very much shorter than the running part. Did I mention the heat, meaning that it was - really - hot? Seems like the running (or walking) part was not very eventful, no song stop, no drink stop (now THAT would have been a tough one to carry drinks inside the forest all the way). Just no special memories.
Towards the end I had a nice chit chat with Slush Puppie and King Ralph about the art of rendering favours to one another and maybe to public servants in different countries.   Union Jack came back from his hiding in Angeles City (no, not Tinseltown, the other one) and received a mug and certificate for his 50th run and soon after at least I was happy that the aircondition in my automobile worked.

Amd now to something completely different:

Posted by Marie Tamponette at 23:36 3 comments:

Last week we went on holiday to a place somewhere in the Salzburg province, hence not even a fake run report.

After the Regenbogenparade here in Vienna (CSD.Parade) on July 3 Sex Energy and I went to the long anticipated opening of my beloved Summer office on Rathausplatz. It's the place to spend your lunch breaks in Summer if you happen to work near the centre of Vienna. Definitely. Current Beer price (Inflation indicator) is Euro 3,50 for a Pint. 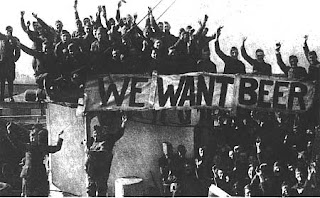 Posted by Marie Tamponette at 01:18 No comments:

Once around the block

Who really cares about run lenghts at full moon runz? I can't speak for everyone of course but for me at least these runs shouldn't last longer than 30, maybe 45 minutes max. Casting Couch was being helped by the Great Kuntini and Dr. Kunt himself and the use of the pool in the garden before the run, helped by a few beers and the warm weather made just for a short run, mainly around the extended block in Neu-Guntramsdorf and back via the Wiener Neustädter Kanal, passing by the beloved Teichheurigen Liska am Rohrteich. Very much to be recommended.
The circle was being followed by Kunt Tell Ya, Rowed Runner and yours truly in sitting position since we all could proudly display our injuries and much credit to the Hares for the beer was really cold this time. Ensuing B-B-Q and then being eaten alive by the mosquitos.


Do you still remember the great movie Rumble Fish? Motorcycle Boy rules!
On out.

Posted by Marie Tamponette at 01:13 No comments:

Read a bit from Mr. Saint-Exupery if you haven't done so already. More of that at the end of this post. More medical problems made me make acquaintance to another Viennese hospital (the AKH this time) and it is only now as I am writing this nonsense do I remember that three years ago Munk and I set parts of a Ski Week Solidarity run through that huge hospital (you know that we developed the successful theory that the Hash Ski Weekers shouldn't gain an extra credit for their run so we started to do runs here in Vienna during the ski week on the same date as they would abroad).
Just that the regarded visitors to this site will understand a tiny little bit more about our local Hash mysteries and traditions.
Much to my pleasure this run took place at the intended venue out at the Figurteich in Guntramsdorf, one of the last refuges in our neigbourhood where nature is preserved and swimming is free and skinny dipping is allowed.
I was told by Sex Energy that she and Cohare Casting Couch were a little bit late with their trailsetting so the start was late too but nonetheless the run was considered to be a good one even by the usual ritical observers. Was the beer after the run warm or cold or just chilled down to air temperature? Matter of fact was that only a handful of brave ones dared to swim since their must have been bazillions of mosquitos. Tough I say.
Come back next year and try again.
On out.

Posted by Marie Tamponette at 00:43 No comments:

A year, ten years from now, I'll remember this

When did you start to run with your own chapter of the Hash House Harriers? Sex Energy and I started way back in 1988 with the Warsaw Hash when the Hash Fee was one US-Dollar and Tuborg and Becks were Hash Beer. Glorious days full of illusions. And no internet, naturally.
Looks like My Pint had been forced or should I rather say encouraged by his brozzer Joystick to join the fold on, a mere three years after that, started his own remarable version of the Hash Photo Website
Was it really on the premises of the Wienerberg that the Hare did lay the first trail of his own?  Since I could jpin the happenings for a change I can happily report that due to ongoing medical problems I could share the last place of the pack to enjoy a few stories about Health Care and Train velocities with Mr. Vindobona Hash , the man who pulls all the strings here, Mr. Maintainer of the Vindobona Hash Website... no name will be mentioned here. Suffice to say the man without whom.
After lotsa rain until shortly before the run the terrain was a little moist to say the least and a few denied the steep downhill climb in the middle of the run, choosing a more comfortable way around.
The end was rather quickly alongside the rear end of the Wienerberg city and then everything seemed to be a piece of cake.


How Can I? Do you recognize the singer? The guitarist is another hero of mine.

On out.
Posted by Marie Tamponette at 00:03 No comments:

Don't get around much lately

The Arbeiterstrandbadgasse was never a big favourite of mine as far as runlocations are concerned but always a fixed point for the likes of Crag Rat to start his runs from. Anyway, since I was still prevented from attending this run (and the last occasion to see the haring prowess of Crag Rat and Minnie Mouse since they are moving back to Kenia in September) one can only speculate about the happenings.
I remember on one occasion that Crag Rat decided to take us all the way down (or up) the entire Alte Donau to the very end and back on the other side, a distance well reaching some 12 or 13 k's.
Funny that no-one ever thought about or tried to set a beerstop up at the Donauturm. Or hold a Hash Soccer interlude at those vast lawns of green in the Donaupark.
Well, thanks to the Hares nonetheless for their friendship and all their efforts over the years. 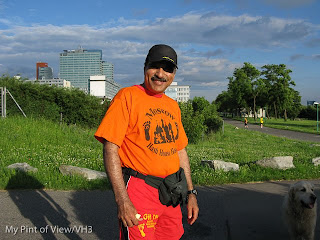 Please find a very suitable comment about all this  here: