And we mustn't forget

On the chase for various up and coming 1000 personal runs with the World's Worst . The next to be inducted into the "Order of the Vindobona Hash (OVH)" will be Flying Dutchman and MOM and, with some ground to cover, Ice Queen and yours truly.  The sole Harriette in these ranks, assisted by Just Debbie used the Blue Moon occurrence for a walk (you can't really refer to a distance of less than 2 kilometres as a "run") that started off from the Metrostation Schottenring, was leading all along the Franz Josef Kai and Schwedenplatz (with the occasional short runners loop, three runners out of a folk of 20; Mind the Gap, The Blessed Saint Norman, OVH, and Joystick) to a Drinkstop featuring Schnaps of highly dubious looking consistency.

On across the Marienbrücke (with a Hashview pointing to the Motto am Fluss) and a little further to the Otto Wagner Schützenhaus (yes, I am reading the sights displayed on Google Maps here) with an inventive way home along a platform of the U2 Metrostation Schottenring. MOM, Grandmeister of the Blue Moon Hash, was entrusted to buy the Beer supplies and came along with cans of Landgraf (?), something I have never heard of, let alone tasted before. A nice occasion altogether and fun was had by most, as far as I could see. Naturally, a few visual embellishments to follow.


Posted by Marie Tamponette at 22:17 No comments:

Are you my Sunshine?

Thanks to Global Warming we have not had decent winters or rather decent winter weather in Vindobona for years, althoughsometimes I would have loved to bundle up. But there is always a next time. Next year. Or maybe next week. To-days weather way a-greying with a wee bit of sunshine and 13 degrees celsius. Not really normal. What was normal instead was a run set by Mind the Gap and King Ralph that was leading to a few greener parts of that district of Vienna (such as the Aupark Jedlesee). Naturally, getting to the Danube required to cross a walkers bridge across the nearby motorway A22. The Donauinsel, which was put in place to prevent the nations capital from floodings, is 21 kilometres long (and maybe a few hundred metres wide) which makes Hashing - a culture technique if you want that requires a good liver, a bit of stamina and orientation - foreseeable. In that respect that false trails cannot lead too far off as they would finish down at the Waterline on one side or the other of the Island.

At long last, coming all the way to the Nordbrücke and crossing a walkers bridge again, the back trail led along another oft-used starting point in recent times (the Sinawastingasse in the 21st district) and back to the carpark (and the cold Stiegl Beers.) Visual link to the walkers trail (yes, there also was a runners trail) provided by Lord Glo-Balls, OVH.


Slush Puppie and Cardinal Munk, OVH have been singing the Hymn of Upper Austria (Oberösterreichische Landeshymne), a song I have never heard before. Okay, fair enough, I come from Lower Austria (Niederösterreich), that might be an excuse.


Posted by Marie Tamponette at 23:35 No comments:

Here comes a strange test result of two guys who are known as the Bier Probierer (beer tasters). They sample beer that is said to have helium added to it. Can this be true? Find out for yourselves ;-)

Speaking of which, Cardinal Munk (OVH) presented a newspaper article about a Japanese Brewery which launched collagen-infused beer aimed at female customers. To be continued sometimes.

Posted by Marie Tamponette at 20:43 No comments:

Labels: Beer and other stuff

Here are some more bits about yesterdays run in Blumau (and I even found more information about this weird place):


(Link provided by Lord Glo-Balls, OVH). In this respect I hasten to add that I would love to include these Relive and ony other run related links here, just send them to me, you shall be given credit and I needn't even be bribed with beer. There are still a few bottles of cool and lovely Schremser Beer in the house.
The following pics were given to me by Tickpleaser, thanks for that. Yesterdays expedition certainly is an early candidate for the run of the year. 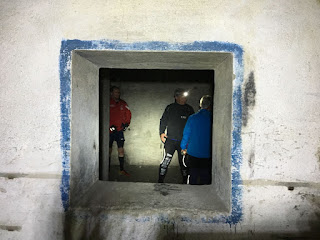 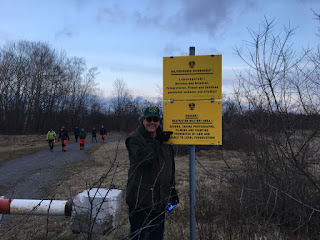 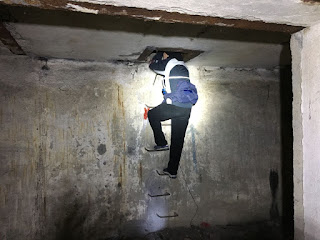 via GIPHY
Posted by Marie Tamponette at 21:28 No comments:

About every other year Deodorant comes up with a run that is much in demand amongst the members of the World's Worst. The area he takes us time and again is the former (in a timespan of 10 years ago) Powderfactory in Blumau-Neurißhof. This was factory was built in the late 19th century and was run by the Imperial Army. Its infamous reputation stems from a major explosion in 1922 that left a vast array of ruins, tunnels and underground shelters of all sorts and forms. Interesting information about the place's history can be found here, here and here (with lots of pics.)

To come back there in the winter (and the freezing wind of course) forms its own sort of excitement and the promise of a Glühwein stop at the Hares place well, maybe motivated some of the pack. Some of the tunnels were pitch dark inside so torches (flashlights) were of the essence. Lots of climbing and then a few halfway decent running sections eventually led back into the land of the living, the following Glühwein stop (which came up a while after the completely ignored song stop) was welcomed by all. The end was near (as it always is) and the carpark came up again. Not too long circle with a Hashy birthday Down Down for Ice Queen.

Posted by Marie Tamponette at 21:27 No comments:

As sure as early January days are the runs at the Tickpleaser residence up on Gießhübl. One of the usual features of these winter runs is snow, ice and Chili Con Carne afterwards. The Chili was to-days special for the On After, snow and ice were absent in favour of a bit of mud (not too much actually).
The title of this post has been pointed out to me by the Cardinal Munk, OVH and refers to this piece of music.


With the help of CoHares Mind the Gap, No Balls Prize and Squeeze Box Mama (Chili Hare) a picturesque run was successfully squeezed out of that area, showing the inevitable ascents, runners and some walkers parts, no song stop but a further and rather steep climb up the hill to get to the Salzstanglspitz (with an altitude of 535 m). I was starting to doubt the promised beer or should I say Schnaps Stop but have to admit that the reward came in plenty and in form of glorious Bailoni Wachauer Gold-Marillenlikör. YUM! Good stuff for sure. After the circle with second rate beer (apart from two cans of Löwenbräu which I stole immediately), it was on to two pots of first class Chili (meat and veggie alike).


Run panorama provided by Primadonna. Thanks for that.

Posted by Marie Tamponette at 21:57 No comments:

Up, Up and away

AGM Day (Annual Grand Meeting or AGPU - Annual Grand Piss up - that's how we referred to it in the golden days (?) of the Paris Hash. Also some sort of a Farewell for the Grand Meister Multiple Entry, who like a false Canadian Dollar kept coming back and forth from different angles of the globe to Vindobona, eventually to take over the esteemed leadership of the World's Worst three years ago. And the guy who institutionalised the TGIF and S.H.I.T. events here.  On his final run he was up to set a traditional AGM day run starting off from our very own Hash House, the Gösser Bierinsel in the Prater. The whole Prater forest, a vast green area near the city centre is an ideal place for running and drinking (remember that the Schweizerhaus is just a few kilometres away from the Hash House in the Wurstelprater).

AGM days runs are also a rare occasion to see Mohair Richard Kopf, OVH actually set a run. Well, he is the regular master of ceremonies in the World'S Worst circle after the runs, so there is no real complaint here. As mostly, I am proud to present a few selected pics from the Moron Brothers Inc. (for incompetent) photosite.


As always, our friends from the Gösser Bierinsel did reserve the main room for us.

Important results of the AGM were the election of Casting Couch as Grand Mattress (congrats!), the resignation and departure of Multiple Entry (thanks for all your work Chief!) and the change of the Sunday run starting time from two thirty PM to two PM (that makes sense in the winter). As usual, accompaniment by copious quantities of Gösser Beer.


Posted by Marie Tamponette at 21:23 No comments:

We started the Wino Walk in 2002 and over the years we have come around a bit, thereby mainly staying in the area south of Vienna which is the Thermenregion (indeed, once upon a time this used to be a volcanic area). 17 walkers and no kids found their way to Baden and, after eventually picking up Tickpleaser, Casting Couch and Two Bob somewhere along the route ze overall direction was getting to Sooß, neighbouring village to Baden renowned for their good red wines. (At one time during an annual event called "Winzerwandern" there were 35 partaking winemakers just along the main road in Sooß, winedrinkers heaven!).


Two casual hours later we arrived in Sooß and had pleasant lunch at the "Heurigengalerie", nice place with tasty wines. Getting en route back to Baden within the vineyards was leading straight to a second and final watering hole, the Heurigen Zierer (again, great wines!) with a few traitors preferring to dine at a Gasthaus next door. Foggy day and pleasant company, we hope that fun was had by all who came along.

via GIPHY
Posted by Marie Tamponette at 21:44 No comments:

The new year arrived with lots of historic dates to commemorate. There were reports about an interesting book presentation in that respect. In November there will be the 100th anniversary of the Ostrich republic to celebrate, before that, there are a few other historic years to remember, all ending with the figure of eight. Interesting parallel that the Mother Hash had been founded in 1938 as well (Diamond Jubilee is coming up later this year).

Coming back in brief to the Red Dress Run, pics have been published by My Pint (and you can see all 136 of them here). The usual year after year pic looks as being proudly presented here:

Nothing beats hard work
So, lace up and get to it
Your future awaits
(Hash Haiku, found on the Internet)

Posted by Marie Tamponette at 21:24 No comments: