The starting point had been announced in an obscure street near the completely revamped Vienna Hauptbahnhof area (the old Südbahnhof in a former life) and without technical guidance by another obscure application on my mobile device it would have been tricky for me to find the place. What have YOU done when there was no Internet, no mobile phones, no Hash Blogs ;-), just a piece of paper with an address written on it? Of course you would have used the part of your brain cells left intact by excessive beer consumption.

Anyhow, Hares Ice Queen and Primadonna were out to spoil us with a trail leading from the Schweizergarten (not the Schweizerhaus) right into the vast space Arsenal with its Heeresgeschichtliche Museum and for a while through backroads of the 3rd and even the 10th district. 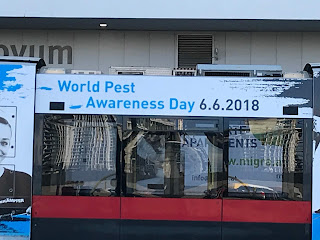 At some point there was a richness of motorway bridges coming from and leading into all possible directions. (Kind of a Liliputian version of Los Angeles Freeways). Naturally, the right trail was pointed right in between those roads, some with cars on, some without. "Now would Primadonna have the audacity to lead us onto the nearby Motorway?" Of course he would! Even without cars passing by it was a weird scene with the Monday evening traffic whizzing by on the A23. The explanation was that the Hares have used a motorway ramp that had been built all those years ago but had never been opened for traffic, one of the wonders of life in the Ostrich Capital. For an explanation on all this see here. 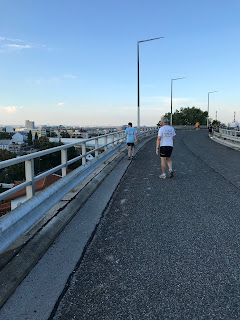 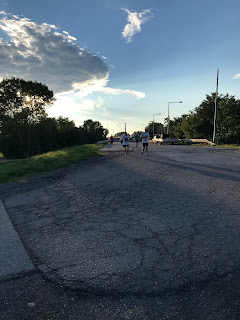 Right at the end of the Motorway ramp the green area started again, showing that best laid architect's plans can lead into a void sometimes. My courage was rising at the prospect that we were getting near the lovely Böhmische Prater and a Beerstop that we've been promised (by reliable people, Prof. DDr. Felch, are you reading this?) After some more running the Böhmische Prater with its great Beer Places came up and, normal for Hashers, within 15 seconds everyone was sitting and after another 15 seconds with a beer in hand. After the beerstop it was on back through the 10th district, passing by the old Ankerbrot factory (with Eurohash memories being discussed again) and at some point the walkers trail ceased to exist as there were no marks anymore. Fair enough, the carpark was only a couple of streetcorners away.

During a joyful circle in a public park not far from densely populated building blocks a police car drove by, slowly and attentive and DID NOT STOP to ask questions. We seem to be losing our radical edge, or rather we may start looking the way we are, geriatrics on the booze loose. Like I said in the circle, this run gets a five star rating from me. Hash Flash pics can be watched here.

Posted by Marie Tamponette at 21:55 No comments:

Right before the start of the holiday season at the end of June (for those with schoolkids, ahem) a Full Moon run in Traiskirchen was offered by Casting Couch and TwoBob. A speciality of the Thermenregion, the area to which the village of Traiskirchen belongs are the recurring wine fests beginning in June and going on in various other villages (Guntramsdorf, Mödling, Pfaffstätten, Gumpoldskirchen, Sooß) until the end of August.

No, of course there was no wine drinking stop being offered by our friendly Hares. The trail was showcasing various places of Traiskirchen and back to the carpark alongside the local waterway. The small crowd of less than a dozen was entertained during the circle by the R and A Ice Queen and Slush Puppie.

OnIn afterwards was booked at the Heurigen Karl Alphart, with wines and food to be recommended.


Pics of this run can be watched here.

Posted by Marie Tamponette at 23:29 No comments:

is another term in use for the annual run near the Donau-Oder Kanal which is a long way if one comes from the south of Vienna or just around the block if you heading out from this place, for instance. Justin Beaver successfully started this tradition that shines with regular BBQ and THE POSSIBILITY of swimming in the Donau-Oder Kanal, something that I have never seen taking place, mostly because of poor weather.


Long and flat running stretches are possible within that neighborhood (and from one year to the next there are plenty newly-built houses to admire), and the outskirts of the Lobau have been visited many a time. Neatly being split into a runners and a wa*kers trail, the run lengh did not exceed the standard of one hour. There is a Tennis club nearby the Hare's domicile, and obviously there have been complaints in the past because of the World's Worst circle noise so there was no choice left but to move the festivities even further away and into the adjacent fields. As always after the end of the circle, fine grilling and drinking until late at the JIB's house. 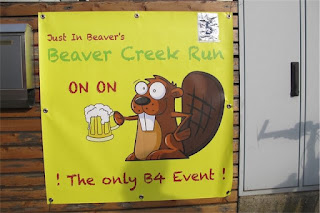 Pics of this run can be seen here.

Posted by Marie Tamponette at 23:10 No comments: