Making good use of a short time window - no help with the schoolwork of our daughter, no walking the dog - I was free to take the nearby public transport connection into the heart of the Ostrich Capital and walk the short distance over to Schwarzenbergplatz, with its commemorative landmark water fountain.

A dozen or so Hashers took off - walking that is - in the direction of the Heumarkt and there was an immediate first highlight when the trail was leading straight through the entrance area of the noble Konzerthaus, where there was an event about to start. As there were many concert goers, we didn't get too many funny looks, let alone maybe for Walrus' impressive hat/cap/wig.

On along the ice skating rink of the Heumarkt (where Holy Roamin' Empress, OVH found out about the Worlds Worst Hash many years ago) and into the nearby Stadtpark still walking with the exception of Mr. Pink and Pussy Whipped it was on further across the Ringstrasse and eventually....


There is a new shop in the centre of town called the Weihnachtssalon and they stay open all year round. Which is charming for  Christmas junkies like Prof. DDr. Felch, OVH (see above) and yours truly. And they do count the days down to Christmas and that blackboard, all year round.
A few minutes on there is another new drinking place called the Bürgerliche Brauerei, right next to the well known Flanagans Irish Pub. A beer stop was called - pay for your own, no more commercial beer stops sponsored by the Hash -  and everyone went in. from what I could tell, happy faces all around.

After the beer stop, a short way back to the start and an appropriate circle. Mr. Pinmk excelled himself with a double stiff arm Down Down, and, talking about Full Moon runs, this chapter hit the (a) local newspaper scene. 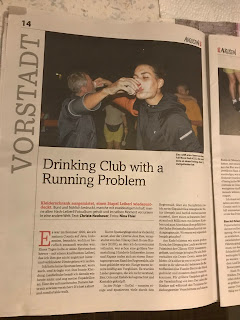 Posted by Marie Tamponette at 21:40