View from the Hill

Even after running with this Hash Chapter for nearly 23 years, Vindobona has charming and picturesque angles that are unknown to me. The first Sunday run (which actually took place 7 days ago) started near the Hütteldorf train station in the 14th district.

Still remembering that on one previous run Mr. Pink had set not far from this area he's successfully lost half of the pack during the run, I was kinda curious of what would lie ahead. Sunny afternoon and all that, good crowd of 25 (including visitor?/returnee? Squeeze Box Mama and definite returnee Alice, it was on off through the green neighbourhood and, after some water-treading and passing by the Landmark Ernst Fuchs Villa, eventually on uphill into a vast green recreation area called "Erholungsgebiet Paradies". 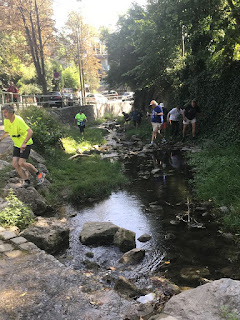 Soon after we entered this forest there was a steep - quite steep actually - ascent that reminded one on times long gone by, namely King Ralph and El Ninos/TBSaint Normans, OVH killer runs that incorporated VERY STEEP SECTIONS. On a view pint way uphill there was a Schnapsstop and an impressive view all around. 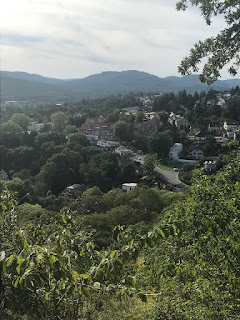 Happily passing by various playgrounds for kids and older kids (and a little lake called the Silbersee) it was on down to the area of Rosental, often used by Afterglow/My Sisters Glowing K before she left the fold to live in Germany.

Arriving back in civilization, the last stretch of that run was leading thru the train station building and finished off with a long stretch alongside the Wienfluss. A big surprise at the circe was that the RA; OVH (!) provided cold beers (!!) with obvious valuable help by the Cohare Mrs. Pink. At the circle it was temporarily goodbye to Daisy Balls, off to South East Asia for a while. She will be back for the Christmas Party she told me. 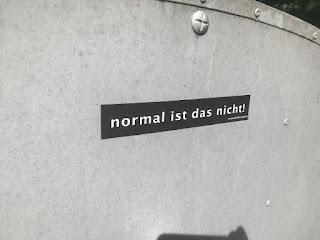 Here are the Moron Pics.