Keepin' out of Mischief Now

It was the last Monday run of the season, always signaling cooler and darker days ahead. Although, with the everlasting summer and warm temperatures still going on, the main thing to feel sorry about was the darkness, setting in at 7:30 p.m. already.

The Pötzleinsdorfer Schloßpark and its surrounding wooden paths, on the outskirts of Vienna 18th district were a most suitable venue to see the Monday evening runs off this year. Many years ago (between 15 and 20) there were many Hash runs in that area, amongst these a legendary winter run hared by G-String (serious mess up between Hare and Hounds) and an even earlier live run that was hared by Whoppa and myself in 1998, No Mercy Master was still around and in best running form. We were prevented from being caught (and from receiving the appropriate live Hare punishment) by a massive thunderstorm that washed all of the trail away. But this is Hash History.


The started nearly on time and the trail was leading through this beautiful park and further uphill into the adjacent forest, all the way to the Wirtshaus Steirerstöckl (great place, if only a little pricey) and alongside hidden gardens. Due to the long hiatus of Hash runs in this area I nearly forgot about all its charms. Still running and walking further uphill until a former Watertower with a nearby drinking fountain came up.

After this, it was alongside the Neustifter Cemetery and back downhill through rather posh-looking and quiet backroads of that area. We passed by a much inviting Heurigen restaurant on our way and reached the starting point again n the beginning darkness. After the beginning of the circle (which was held at the parks entrance door, with the help of one bribed employee - cold beer!, Moehair Richard Kopf was a late cummer, Sinex and Multiple Entry were visitors and a new boot called Barney made his debut with the Worlds Worst. 10 minutes to eight the first police car arrived and left after suitable explanations given by Prince of Barkness, OVH ("We are driving once around the block and then you're GONE, capito!?" "Thank you officer"). 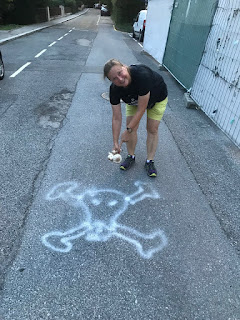 Shortly after we ended the circle a second police car arrived ("We were told that there was a bunch of rowdy pensionists at the park, and mind you a third car is underway"!). Well, the Cardinal and I had a pint of Weitra Bier for supper and most of the rest took off to the nearby On-In. Nice run, thank you to the Hare Casting Couch.


Where are the toilets?   And now, on to the Sunday runs.

Here are the Moron Pics.

Posted by Marie Tamponette at 21:22