As a World's Worst Hasher you know of course that we consider two joints within Vienna city limits, the Grüß-di-A-Gott Wirt up that hill and the Gösser Bierinsel in the Prater, venue of our Annual Grand Meetings since 2002.

Casting Couch, a Jill of all trades came up with a run in that often used area (does anyone still remember the Terry Fox runs from long ago?) and indeed used many a corner that we haven't been to in years. Mind you that the Prater offers countless running paths, cool beer places, an amusement park and all this close to the centre of a nations capital.

Two visual examples of how varied this place is:

A good hour after the start the circle happened and the OnAfter in the garden was crowned by a healthy rain shower. But there were two new boots, one of them, Just Daniel (?) from Bielefeld was about to return. More of that later. 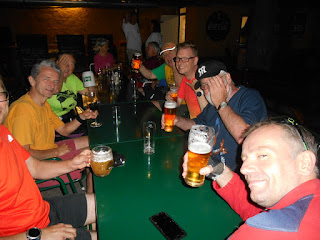 Have a look at the official Moron pics.

Posted by Marie Tamponette at 13:29