A conjecture. If Tickpleaser would set a run from his home in Tirolerhof/Perchtoldsdorf. overlooking a good part of Vienna, would you trust him if he assured you that the trail would be flat? Runners and walkers friendly? On the last day of August, accompanied by the usual temperature drop by 10 degree to put anyone off from using the Hares swimming pool darkness set in a bit earlier and in contrast to the previous 15 or so runs Tickpleaser started from his house, this trail featured the classic uphill trail right from the start and, after walkers and runners trail were marked (Root CAnal, Holy Roamin Empress, OVH and myself stayed on the walkers trail) there was much more uphill running ahead, in beautiful surroundings, but still. 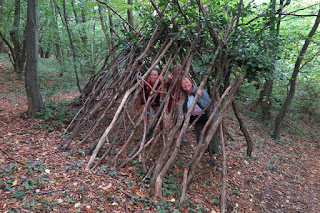 After meeting with the runners again, cameth the DEFINITE hill to walk up. That one reminded me of those runs that St. Norman used to set with El Nino, when the latter was still a kid and loved to emphasized has love of torturing inmocent Hashers. Mother Superior, OVH, while crawling up that fateful ascent, found a halfway rotten camping chair which he used right on for the circle. Talking of which, Mr, Pink arrived at the circle when darkness set in and St. Norman and Multiple Entry arrived a bit after a torchlight was the first sign of these two.

A few words about the circle, which was held deep inside the forest (why?), we ran out of beer in no time. Maybe that was part of the Hares clever tactic to get everyone faster to the outside BBQ in the rain that set in soon after. All in all, nicely done. 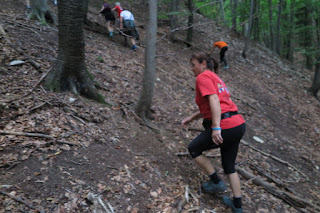 Posted by Marie Tamponette at 21:48