Deodorant, Roll On and Knödel mit Ei who now goes by the rather strange name of Tung's n Balls are about to leave the Vienna area after 19 years to move to even more sunny environments in Carinthia. Well, technically spoken Tung'S n Balls, being a grown up man, has left his parents home already and Roll On kindly provided the cooled beers at the beer stop after two hours into the run.

But I will start from the beginning. To accomodate the Hares wish and to avoid the rigors of exercising through a military training area on weekdays (when this is not allowed), the pack convened on Sunday afternoon at the ruins of the former Powder Factory between Günselsdorf and Blumau. The place's history has been covered on several postings about previous runs so I won't include links here today.

Despite the absence of all three Morons and several more regular runners, another strong group of 30+ assembled and, after explanations about walkers and runners trails were given, headed out. I should have listened to the Hare's words about "long loops" and "the area is not the large" when long and straight paths had to be worked away before we headed into the wood of ruins.


As usual, then started a stumble in out of these ruins, slopes, tunnels and, even though there are probably only three or four main paths leading through that area, I regularly manage to get completely lost and, looking at the number of walkers whom I met after a while at a crucial checkpoint, I was certainly not the only one. Give the Hare credit for a tasty cocktail stop in a bunker, were cool drinks were consumed in torchlight.

In the interim, Squeeze Box Mama hurt her ankle during the first part of the run and was bravely rescued by 007 and Just Eamonn, have a look at the visual proof. SBM stated that she now has a multicolor foot. Wishing you a speedy recovery.


Thinking we would be the absolute last to arrive at the Beerstop, I phoned up the Hare who rushed to rescue the slower running/walking group, only to find out that we were in the lead! The deserved reward were lots of cold beers.


After the runners group joined the beerstop and even more drinking, it was on back on a short and quick way, lasting no more than 10 minutes from the Hare's house. The main happening in the circle was the naming of Just Eamonn for his heroic support in the rescue of Squeeze Box Mama. Naming announcement to follow. And of course a New Shoes Down Down to Victorias Secret.
Over the years Deo and Knödel mit Ei have set many imaginative runs and the Deo Family will be missed, though Deo threatened to be back in Vindobona five or six times a year. Watch out.

Here are the official Moron pics, taken by various Non-Morons in their absence. 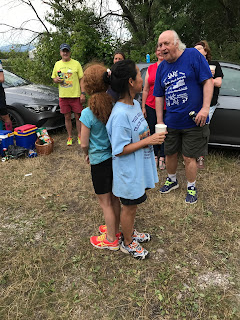 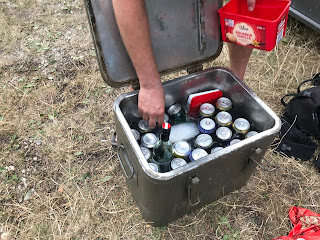 Posted by Marie Tamponette at 23:38