In times of strange and threatening viruses one can partly rely on a remedy, a magic potion that also keeps the Hash going.


Casting Couch and 2Bob called for a run in an unknown area, though only 35k away from my domicile, which was totally unknown to me. Forests, lone houses, and stables were all around (but no network connection for my mobile phone).

Located only a few kilometres behind the lovely Helenental where Sperminator and after him Deodorant have set several classic runs, the village (?) of Rohrbach/Zobelhof is a place I have never heard of. Meeting place was on a hilltop. Anyhow, 20+ runners came along, a rather unclear Chalk Talk revealed that there were runners and walkers trails, leading in different directions. A bunch of more than 10 took the walkers way that was leading dowmhill for quite a while and, memorising many a worthy run that St. Norman, OVH together with El Nino and King Ralph on his part have set in former years, a short but steep climb up a hill followed.

After 25 more minutes of creepy crawling through thick woods (party muddy) it was back to stables, fields and farmhouses and to the carpark eventually. The songstop was placed high up another elevation, nice views included. It took the runners only a couple of minutes longer to catch up. 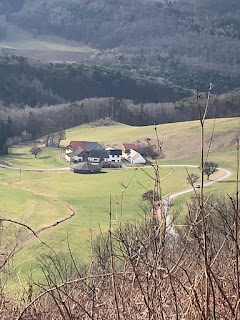 Regarding the liquids for the circle, well, plenty of Corona Beer saved the day. The Hare's capabilities to come up with a completely new location is in part what Hashing is all about. Get to know the area around you, while enjoying a few beers. 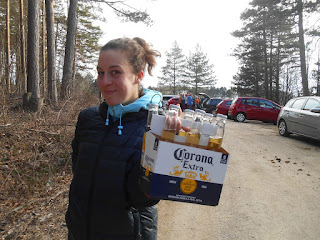 Posted by Marie Tamponette at 22:05