wow! I am writing this to you as my dear friend whom I will not have the pleasure to meet again in person, not in this life. Many years ago, when I invited a group of friends to a birthday party at a fine wine makers place, Cardinal Munk asked me could he bring along a friend whom I didn't know? He told me that this friend of his was a fine guy and had lived in New York for a long time and was a friend of one of the Cardinals younger brothers.

That friend in question was you. This must have been the start of your tenure in Vienna, when you and your family moved over. Over the years you brought your two younger kids to Hash runs, you and Maddy came along to a couple of classical concerts in Viennas Musikverein where we once had Schnaps shots during a performance of the Vienna Philharmonic, much to the embarrassment of Cardinal Munk!  :-)  And of course, we would often meet at Flanagans, a much preferred place of yours.

You selected the most fitting Hash name for Tickpleaser, who moved to Vienna coming from England around the same time as you, coming from a bit further than that.  What I enjoyed most and still do in this moment, despite the sorrow, was your easygoing and uncomplicated nature. I confess that in the beginning I had slight problems understanding your Liverpool accent but once I got around it I found that amusing, as much as our talks about family matters (as a father of four you had lots of stories to tell), job and all the little things that like minded souls enjoy talking about. After your working contract in Vienna came to an end you moved back to New York and, eventually, after you retired, returned to Vienna. Catching up again was real easy and, even though we would not have the chance to meet often it usually took one phone call to make you join various friends meeting, often at the Schweizerhaus.  You were great company at last years Hash Christmas party where you were gave decisive help in connection with the Awards Speech, i.e. blowing up the abusive balloons together with another gent.


Your family wrote that you taught them to try take something positive out of every situation. Well, knowing that you're gone doesn't help here. But, speaking as a friend, it has been and always will be a privilege to have known you. I found our talks and our friendship an enriching experience. I will miss you. 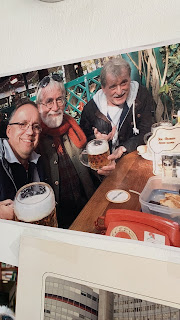 Posted by Marie Tamponette at 22:25